The sale of the 64-acre Tioronda Estate, the historic property on the outskirts of Beacon that includes the former Craig House psychiatric center, could happen within the next month.

An offer has been accepted on the property, said Beacon-based broker Daniel Aubry. He declined to provide the sale price, although a six-page brochure prepared for potential buyers gave an asking price of $8 million.

Aubry also would not identify who made the bid, other than to say it was a group of investors “who already own a considerable amount of property in Beacon.” They are paying cash, he said.

Aubry described the investment group as “very experienced people” who have worked in Brooklyn in the past. The parcel was never placed in listing databases, he said, but instead advertised by word of mouth. 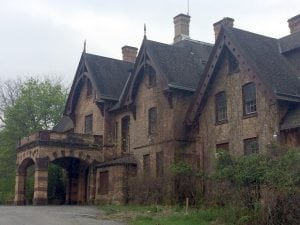 The 14,000-square-foot, neo-gothic mansion on the property was built in 1859 for Gen. Joseph Howland and his wife, Eliza. A 38-room extension was built in 1979. A gatekeeper’s home and a building that served as a church and school still stand, although a carriage house and a craft shop were torn down in 2011. 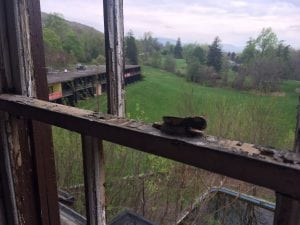 The parcel, which is located on Route 9D across from the University Settlement Camp, is roughly divided into upper and lower portions, Aubry said. Regarding the upper portion, where the mansion sits, “the thinking is that would be wonderful for a destination spa or high-end resort.”

The mansion will not be demolished, regardess of future development plans, Aubry added.

Good for What Ails You

In 1935, the editors of Fortune selected Craig House as one of the five best sanitariums in the country for nervous disorders. It was run by Clarence Jonathan Slocum, who had purchased it two decades earlier with a partner. They named it after Craig Hospital in Scotland, which allowed its patients to walk its grounds freely.

At Craig House, Fortune reported, “there are no locked doors, no barred windows in individual cottages scattered over the estate. There are several employees to each patient — almost 100 nurses, a score of men working on the grounds, six doctors, dozens of cooks, waitresses, chauffeurs, etc.” The estate had a golf course with a pro who gave lessons, along with swimming pools, six riding horses, tennis courts, a baseball field and a gym.

The article continued: “You get the atmosphere of an upper-class home, with Dr. Slocum and his wife in roles of host and hostess.” The doctor “detests psychoanalysis and will have none of it. His ‘practical psychotherapy’ consists simply in getting on friendly terms with the patient, visiting him daily to talk over his problems and giving him advice and encouragement.”

The lower portion of the property, which borders Fishkill Creek, will likely be developed into residential housing, he said. Beacon zoning regulations would allow about 22 single-family homes on the entire property, Aubry said, but he speculated that a new owner might ask for a variance.

“I don’t think 22 housing lots is a viable economic option,” he said. “They might want to get some more density in there.”

After Howland’s death in 1885, his widow donated the property for the care of the mentally ill. Part of the estate was purchased about 30 years later by two doctors who opened a psychiatric hospital specializing in addiction treatment, calling it Craig House. 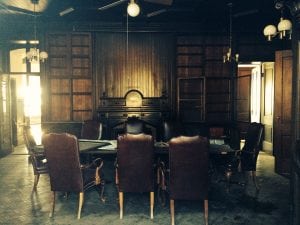 Luminaries such as Zelda Fitzgerald and, later, comedian Jackie Gleason spent time at Craig House. Frances Seymour, the wife of Henry Fonda and mother of Peter and Jane Fonda, committed suicide there in 1942. Rosemary Kennedy, the elder sister of President John F. Kennedy, spent years there after she was given a lobotomy in 1941. Marilyn Monroe was rumored to have stayed, as well.

The hospital closed in 1999. In 2003, Wilson purchased the property but never developed it. After suffering two strokes, he committed suicide in 2013 at age 87 and his estate has owned it since.