This story should make bibliophiles sit up in their chairs: It’s about a used bookstore in Nelsonville with well-organized shelves of first editions, volumes with interesting dust jackets and books by authors the proprietor loves (and possibly a few by those he doesn’t) hiding in plain sight and open for browsing only six hours each week. 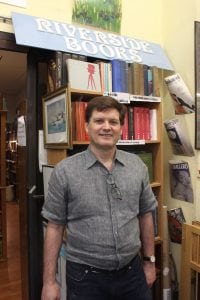 Rob Sternau of Nelsonville’s Riverside Books (Photo by A. Rooney)

Rob Sternau, who has lived in Cold Spring for 30 years, recently opened Riverside Books in the complex of businesses and work spaces at the corner of Peekskill Road and Pine Street. Its hours are Sunday from 10 a.m. to 4 p.m.

Riverside Books may sound like a misnomer, but Sternau named it not after the Hudson but in homage to Riverside Press, which in the late 1890s and early 20th century, “raised the level of book design,” he explains. Although not near the river, “even over here, far from the heart of it, we get a fair amount of foot traffic, hikers mainly,” he says.

Before going retail, Sternau stored his inventory in Fishkill and sold titles online through Abebooks and Amazon. But it was becoming a headache to commute to Fishkill to fill mail orders, especially when he needed to retrieve only one or two books.

When space opened up practically around the corner from his home, he moved his 12,000 volumes to a room leased from Jay Brennan Wordworking. As books tend to do, the inventory has expanded outward toward the entrance. The space invites leisurely browsing.

Sternau’s long experience with limited edition, handset volumes dates to his days at Bennington College and later at Sarah Lawrence, where he earned a degree in writing. There, Sternau, a printer by profession, got to know poet and printer Claude Fredericks, the founder of Banyan Press, which specialized in hand set limited editions of works by writers such as John Berryman and Gertrude Stein.

Sternau also landed an apprenticeship with Sidney Rappaport, a printer who specialized in photography books by the likes of Ansel Adams, Irving Penn and Richard Avedon, the latter of whom worked in the shop for about six months in the 1970s. “He saw commercial printing as an extension of his art,” Sternau recalls. 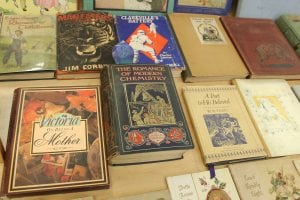 A table top display of books with intriguing covers (Photo by A. Rooney)

From there Sternau joined Toppan Printing, a Tokyo-based firm that produces coffee-table books. He is now vice president of business development for Premier Printing.

Along the way, Sternau began collecting books and, about a decade ago, he began selling them online.

“It was a hobby for years, and it helped me buy more books that I especially enjoyed,” he says. He priced his inventory initially using a standard collectors’ reference and was surprised to see how much some of them were worth, especially the first editions. 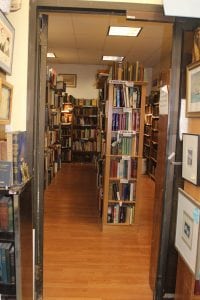 The entrance to the main room of books (Photo by A. Rooney)

Finding the market value of a book is far easier now, he says, because of the internet. “It allows you to compare, but the thing is that it’s really about condition, condition, condition!” he says. “I taught myself [to price books], but it is also a little subjective. Very obscure and rare things are now sold all over the world. I’ve sold to customers in England, Japan, China, Germany, Australia, and last week to Chile. It’s wonderful when the world becomes your customer.”

A stroll around the store, guided by Sternau, revealed a beautifully bound 1858 Bible next to tables laden with coffee-table art books, some of which he printed. There are books with ornamental bindings, children’s books from the late 1800s with ornate covers and other antiquarian books, but also many with plain covers and bindings in sections devoted to individual authors: Tolstoy, Hemingway, Thoreau, Kipling, D.H. Lawrence, Dante, Thomas Mann, Anais Nin, Robert Graves.

He points out, in the Shakespeare section, books from a series about the playwright published in 1948 by Laura Spencer Porter of Garrison, as well as, on the local interest shelves, books by the Warner sisters, Alice Curtis Desmond and Mrs. J. Borden Harriman, a history of St. Mary’s Episcopal Church and the 1938 Putnam County Directory. 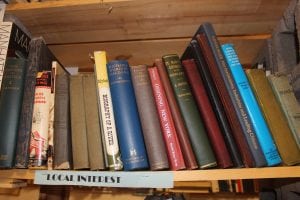 Look closely at the volumes on the “Local Interest” shelves and you’ll see many familiar names and places. Here a novel by Alice Curtis Desmond shares a shelf with a history of St. Mary’s Episcopal Church. (Photo by A. Rooney)

Rare editions are also on hand, though not always on display. His inventory includes an early edition of Robinson Crusoe; a 1750 treatise on Mexican morals produced by the Jesuits; a 1799 Italian book with beautiful hand-colored plates; an 1852 first edition of Uncle Tom’s Cabin, and a 1926 book by Franklin Delano Roosevelt which he dedicated to his grandparents and signed. “It’s particularly special because he was a man who didn’t express emotion much, publicly, yet it’s signed ‘With my love,’” Sternau says.

Riverside Books is located at 11 Peekskill Road, with the entrance on Pine Street. See facebook.com/riversidebooks or call 914-552-4197. To browse Sternau’s online listings, which tend to be for his pricier stock, search for “Riverside Books” at abebooks.com/books/Bookstores.

One thought on “Browsing, Without a Computer”