Trying to put together your family’s story with only the most cryptic clues reminds me of a logic puzzle called Who Owns the Zebra?

Clues are given about a fictitious neighborhood, such as the color of a house paired with the name of the owner, or a pet paired with the position of the house on the street. It’s difficult, but not impossible, to sort each house from the clues. The puzzle resembles our task as genealogists. Often, you have only basic facts, such as an approximate year of birth and/or that a person was born in this or that county. If the person was born before 1850, when the first detailed census was done in the U.S., you can’t rely on birth records, as many locations didn’t have them.

Even if you find a baptism or town birth record, you can’t rest, because there may have been more than one person by that name. So you will need to learn as much as you can about all the families of that name in the area. 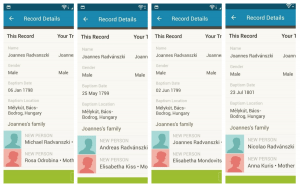 One genealogist asked for help online after finding four men with the same name born about the same time in the same place with different parents.

Let’s say you are looking for a female ancestor born about 1806. The initial step would be to look at all heads of household in the 1810 census in that county that contain a mark for a girl under 10 years old. (In censuses before 1850, only the head of household was named; everyone else was identified by gender and an age range.)

You then need to track the family forward. Is there a matching family in the same location during the 1820 census? If not, is there a family in another logical location, such as on the way to where they would be going if they are your ancestors?

To keep track of the “marks” without names in the early censuses and other records, it is helpful to use a spreadsheet  to sort the references to the people under investigation, and to assign a birth range to each fact. This usually involves educated guesses, of course.

Say you know a person witnessed a will in 1762. It’s a logical guess that the person was between 21 (the minimum legal age to witness a will at the time) and 72 (arbitrary, but you have to start somewhere). So you would plug in a birth range of 1690-1741. By putting the references together with location and related names you can usually develop a hypothesis about whether you are looking at one person or two or more people with similar names. 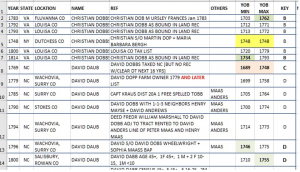 An example of how you can use a spreadsheet to chart the dates taken from various documents and calculate a range for a year of birth. This can help sort out people with the same names who lived about the same time. (Click to enlarge)

As you continue to work through your family, you will discover more events and people who may be part of your story. The goal is to bring the family forward to that magical period after 1850 when everyone was given a name and age by the census-takers, and vital records began to be widely kept.

Those who have ancestors living in New York in 1855 or 1865 will find extra clues because census-takers asked for the county of birth. The 1855 census also includes how long a person had been at his or her present address.

This sounds wonky, but always keep a calculator and spreadsheet handy when you research. Every fact you encounter may provide a clue about a person’s birth year. Once you have assembled a timeline, consider if it makes sense. If it does, make a list of research steps. Based on what that reveals you may refine or even discard the entire line of inquiry. But at least you won’t spend any more time than you have to chasing the wrong John Smith.