The rector of St. Mary-in-the-Highlands, the iconic Episcopal church at the corner of Main and Chestnut streets in Cold Spring, says that after nearly a decade of financial struggles since the 2008 market crash, its endowment is nearly gone.

On July 24, the Rev. Shane Scott-Hamblen launched an online campaign with a goal of raising $1.5 million to replenish the endowment. He warned that, as he did four years ago, without emergency aid the church will have to close and sell the property.

Scott-Hamblen declined to discuss specifics. As of July 28 the campaign at gofundme.com had raised $9,750 from 42 people.

Scott-Hamblen made a similar plea in January 2013, saying the 1.5-acre lawn might soon be on the market because of a lack of money for maintenance. “The church is steadily going broke,” he said at the time. The vestry (parish council) discussed leasing the lawn or selling a conservation easement. With an annual budget of $170,000, it estimated it needed to add $800,000 to the endowment. 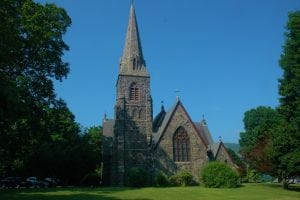 In a statement emailed to The Current on July 25, Randy Florke, a Philipstown resident who is spearheading the campaign (and who was married at the church in 2014 to U.S. Rep. Sean Patrick Maloney), wrote:

“St. Mary’s Church will communicate a strategic plan and timeline to preserve the current landscape of its buildings and grounds at press events currently slated for late September or early October.

“In an effort to organize this plan and make current the financial health of the church, a local supporter asked that the committee show evidence of a grassroots campaign to raise funds. Our reassurance to this donor is multi-layered but began with a stop-gap GoFundMe page which went live just this week.”

Mark Forlow, the senior warden on the church’s 11-member vestry, was traveling and not available for comment.

As in 2013, Scott-Hamblen’s online plea focuses on St. Mary’s history and position at the crossroads of the village. The church building dates to 1868.

“With a Christ-like orientation, St. Mary’s practices radical hospitality across all divides of race, politics, sexual orientation, faith backgrounds and life situations,” Scott-Hamblen wrote. “This means that there is a much wider community we serve outside of our Sunday worshippers.”

Built in 1826, the Union Church was the first in Cold Spring.

1814: The author of a report on religion in Westchester, Putnam and Dutchess counties finds only two churches in Philipstown and describes the moral state of area residents generally as being “deplorable.”

1826: The first church is built in Cold Spring at the riverfront, for use by Baptists, Presbyterians, Methodists and Episcopalians.

1831: The Baptists dedicate their own church (now The Church on the Hill).

1834: Led in part by a priest with congregations in Newburgh and Highlands Falls, area Catholics build and dedicate a sanctuary (now Chapel Restoration).

1840: The St. Mary’s parish is formed with 11 members. By tradition, it was named for Mary Parrott, the wife of Robert Parrott, who may have provided funds to build a church on Main Street near the present village hall.

Source:  St. Mary’s Church in the Highlands: A History, by Elbert Floyd-Jones (1920)

Calling the church and its lawn “the heart of the Cold Spring community,” he noted the corner property is prime real estate that would be attractive for development. It is zoned single-family residential and has an assessed full-market value of $2.96 million. The lawn alone is valued at $275,000 by the assessor.

In 2011, a report prepared by the Village of Cold Spring recommended that the great lawn be preserved through a conservation easement or rezoning.

St. Mary’s is far from alone in its ongoing fiscal challenges; across the country, Christian congregations are steadily growing older and smaller. (The exceptions are historically black churches and evangelicals.)

At St. Philip’s Episcopal Church in Garrison, the vestry cut salaries by 10 percent in 2011 after the church ran a deficit of nearly $80,000, said its treasurer, Charles Dupree. The church has an annual budget of about $350,000, and its endowment totals about $1 million. 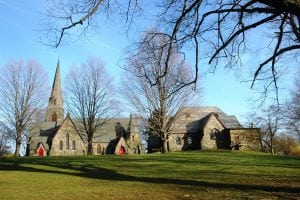 Nationally, a Pew Research Center survey found that the number of Americans who identify as Christians dropped to 70 percent from 78 percent between 2007 and 2014, driven largely by a decline among Catholics and mainline Protestants, which includes Methodists, Baptists, Lutherans, Presbyterians and Episcopalians.

At the same time, the number of people who say they have no religious affiliation (“nones”) has grown to 56 million, Pew found, making them more numerous than either mainline Protestants or Catholics.