Angelika Graswald, accused of second-degree murder in the 2015 death of her fiancé while kayaking near Bannerman Island, pleaded guilty on July 24 to criminally negligent homicide, a lesser felony, and could be released from jail by the end of the year.

The 37-year-old Poughkeepsie woman, known to many Philipstown residents because she had worked in a Cold Spring restaurant, faces up to four years in prison. She has already served 27 months awaiting trial. Her sentencing is scheduled for Nov. 1. 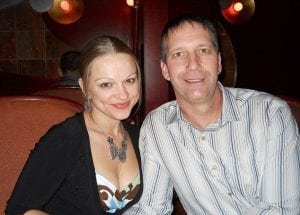 Angelika Graswald and Vincent Viafore in an undated photo from Facebook

On April 19, 2015, Graswald and Vincent Viafore, 46, were kayaking near Bannerman when he disappeared into the Hudson. Graswald was arrested 10 days later after she allegedly told investigators that it “felt good knowing he was going to die.” She was the beneficiary of two life insurance policies totaling $250,000, prosecutors said.

“At the time she pleaded guilty, Graswald admitted she caused Vincent Viafore’s drowning death by removing the plug from his kayak,” Orange County District Attorney David Hoovler said in a statement on July 24. “She also admitted she knew that the locking clip to Vincent’s kayak paddle was missing, that he was not wearing a life vest, or a wetsuit, and knowing that the waters in the Hudson River where they were kayaking were dangerously cold and rough at the time.

“Evidence shows that at the time of the incident Graswald was wearing a life jacket. Graswald admitted her actions constituted a gross deviation from the standard of conduct that a reasonable person would have observed in the situation, and that her actions caused the death of Vincent Viafore.”

Removing the plug, which prosecutors said was found in Graswald’s car, would not cause the kayak to capsize, Hoovler said at a news conference, but “her actions undoubtedly put in motion a chain of events which caused the victim’s death.”

Graswald’s attorney, Richard Portale, argued his client did not mean to kill Viafore. He said her confession was coerced and complicated by a language barrier because she is a native of Latvia. Although Graswald is a lawful, permanent U.S. resident, Hoovler said the felony conviction could lead her to be deported, which would be determined by a federal judge.