It was a pedal-to-the-metal, student-versus-teacher shootout.

On Saturday, July 22, Stevan McAleer and Aurora Straus, both professional drivers from Cold Spring, faced off at an International Motor Sports Association race at Lime Rock Park near Lakeville, Connecticut.

McAleer, 32, a native of Scotland, has been Straus’s coach since she was 13. Now 18, she began racing professionally even before she had her driver’s license. She graduated from the Hackley School in Tarrytown in June and will attend Harvard to study mechanical engineering and English literature in the fall of 2018, after taking the next to concentrate on racing. (When The Current last wrote about McAleer and Straus in 2015, Straus was 16 and racing for the Battery Tender Mazda MX-5 Cup. Her father, Ari Straus, is CEO and managing partner at the Monticello Motor Club.) 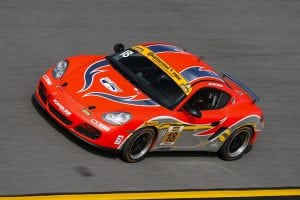 Straus’ No. 18 Porsche Cayman during a race in Daytona Beach in January (Photo by Jake Galstad/LAT Photo USA)

Straus would have savored teaching McAleer a thing or two at the Northeast Grand Prix on Lime Rock’s tough 1.5-mile course, but her instructor is a tough challenger. In the Continental Tire Sports Car Challenge, two drivers share the driving over two hours, with each lap taking about a minute. Both drive Street Turner (ST) class cars, which include sedans, hatchbacks, coupes and convertibles.

McAleer and his co-driver, Chad McUmbee, had the fastest time in qualifying and, after taking the pole position in their No. 25 Mazda MX5, won the race for the third straight year. Driving a Porsche Cayman, Straus and her co-driver, Connor Bloum, finished 11th.

McAleer and McUmbee won the season championship two years ago and almost repeated in 2016, foiled only by a blown engine while leading with minutes left in the final race. The win at Lime Rock put them back into contention this year, pushing them to seventh in the standings — a point behind Straus and Bloum — with four races remaining.

The July 22 race was McAleer’s 50th in the Continental Tire Series. McUmbee handed him the lead at the halfway mark, and McAleer cruised, although another Mazda momentarily narrowed his lead to half a second. But with 10 minutes to go the challenger was bumped off the track. 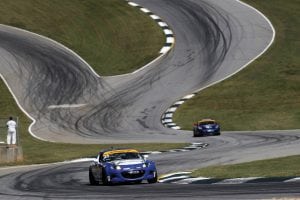 McAleer’s No. 25 Mazda during a race in September in Georgia (Photo by Michael Levitt/LAT Photo USA)

“Lime Rock is a hard course to pass on, so track position is everything,” McAleer said after celebrating the victory with the traditional champagne spray. “There was definitely some pressure at the end but experience got us a win today.”

Straus had never driven the course before a mid-week practice session. Early in the first leg of the race, she was forced off the track and lost several seconds, which put her No. 18 Porsche in a hole.

“We got taken out early so Connor and I salvaged what we could,” she said. “Doing well in the Continental Series is often just surviving, moving up spot by spot.” 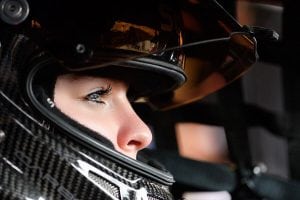 With a Lime Rock race under her belt, Straus said she understands why many drivers call it one of the toughest circuits in the country. “It’s easy to learn, but hard to master,” she explained.

McAleer and Straus say they like Lime Rock because it’s close to home, about 90 minutes from the Highlands, which means many local fans make the trip. “It’s nice to see familiar faces from Cold Spring,” Straus said.

McAleer praised Straus’ progress this season, her first in the Continental Tire Series. “Every time on the track her times are getting better and better,” he said. “Her racing has been wheel-to-wheel with drivers who are much more experienced. She won’t give it up; if she knows she’s in the right position, she’ll make the move.” 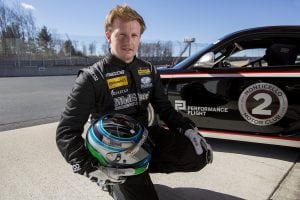 McAleer hopes to help his student find “a little more speed. Then she’s going to be a real threat.”

Straus said she found competing against her coach to be a bit odd. “We’ve had moments of intense competition and moments of cooperation,” she said. “Stevan is family to me. He’s the reason I’ve gotten this far.”

Although they are competitors, both teams are sponsored by ModSpace Motor Sports. And the racers do look out for each other. After Straus’ car ran out of gas 700 feet from the checkered flag at Sebring International Raceway in Florida, McAleer pushed her across the finish line. 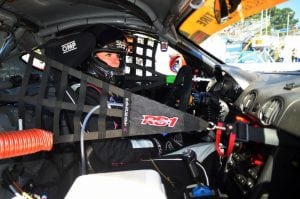 “We finished in fifth place,” she said. “So I have to find a way to pay him back.”

Asked about the Lime Rock race, both agreed that the course’s short straightaways and tight turns favored the Mazda over the Porsche. But the tables will turn starting Thursday, Aug. 3, in Elkhart Lake, Wisconsin, at the 4-mile-long Road America track.

“Our car will be strongest there,” Straus said. “Road America is the perfect combination of long straights but sweeping corners. I’m looking forward to a track where we’ll have the advantage.”

McAleer doesn’t dispute her assessment. “If they put on a good show, it will be tough to beat that car,” he said. “Last year we finished fourth and it was all about survival. It’s a track that abuses the equipment.”

A lap around Lime Rock Park, by IMSA

One thought on “Cold Spring Racers Do Battle (Video)”