The New York State Office of Parks, Recreation and Historic Preservation plans to renovate a house that dates to about 1920 while the Little Stony Point Citizens Association (LSPCA) will build a cabin as a headquarters and to shelter visitors.

The 32-by-24-foot cabin will be funded by a $50,000 grant from the state Parks and Trails Partnership Program and personal and corporate donations, said Fred Martin, president of the association. The total cost is estimated to be about $80,500, he said. The LSPCA hopes to complete most of the construction this year and open the building next spring.

The LSPCA grant, announced in May, was the largest of 20 distributed by the Parks and Trails program for 2017, and more than some regions received. The association’s annual Hoot on the Hudson fundraiser is scheduled for Sept. 10 (see littlestonypoint.org), and Martin said longtime parks supporter Dr. Lucy Waletzky has given a significant sum for the cabin. 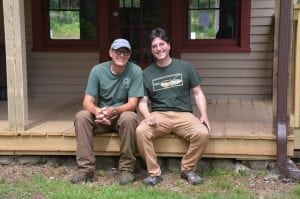 Volunteer labor will save the organization about $16,000 in costs, he noted, including help from two LSPCA board members, James Hartford of River Architects and John Zuvic of Long Nail Carpentry.

Shelter from the storm

The cabin will serve as LSPCA’s home base, with space to hold meetings, store equipment and act as a base for its clean-up days, Maple Syrup Day and Hoot on the Hudson music festival as well as new programs such as oil painting and photography workshops, sing-alongs, potlucks and historical exhibits.

The building will also accommodate groups such as Cub Scout Pack 137, which the LSPCA sponsors, the Girl Scouts, the Haldane Environmental Club and school classes and Friends of Fahnestock and Hudson Highlands State Parks. The building is likewise expected to be the starting point for hikes for senior citizens, toddlers, bird-watchers and Spanish-speaking park visitors.

What’s Up with the Parking Lot?

Across the road from Little Stony Point, where heavily-used trails in Hudson Highlands State Park wind up the mountainside to Bull Hill and Breakneck Ridge, the state parks department is overseeing construction of a parking lot at the trail entrance. Evan Thompson said on July 24 that all that remains to be done are curbs and paving. If the weather cooperates, he said, the lot should be ready by early August to help ease congestion along Route 9D.

Outside, a covered porch will provide shelter from the elements and visitors will be able to pick up brochures. The organization likewise will install water-bottle refilling and cellphone recharging stations. 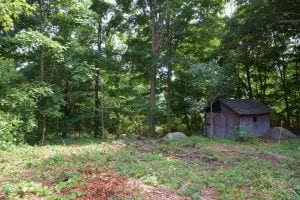 The site of the LSPCA cabin, which should be completed by the spring (Photo by L.S. Armstrong)

Martin said the cabin will help LSPCA connect better with visitors, assist the state park staff and interact with locals, who can use Little Stony Point as “a place to get us out of the daily grind.”

The group also hopes to engage first-time visitors “and encourage their sense of stewardship.” Martin recalled a visitor from Paris who attended the 2016 Hoot on the Hudson and volunteered on the spot after the concert.

The nearly century-old house at Little Stony Point, once a caretaker’s residence, is being renovated to contain a park office, storage and a counter open on weekends for visitors to get maps and information, said Evan Thompson, park manager at Fahnestock State Park. 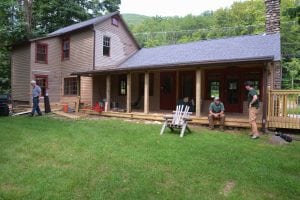 Repairs and renovation will turn the old house at Little Stony Point into a state park office and visitor resource. (Photo by L.S. Armstrong)

Thompson said park personnel have been monitoring the park entrance to deter visitors who arrive with coolers, picnic or barbeque equipment, or swimming gear, redirecting them to Canopus Lake at Fahnestock, a few miles to the east, where a wide, scenic beach offers swimming and nearby picnic spots.

The state Park and Trail Partnership Program, in its second year, distributed $450,000 in grants earlier this year through the Environmental Protection Fund. The money was matched with $200,000 in local and private funding to support projects by volunteer groups at state parks and historic sites. The Taconic region received $107,085 for the Little Stony Point Citizens Association and three other groups:

Whether they come from a distance or live nearby, some Little Stony Point visitors leave havoc in their wake. This past spring, vandals destroyed the outdoor bathroom shed, which had been closed after malfunctioning, Thompson said. Installed several years ago, it had been repeatedly damaged.

But he emphasized that only a minority of visitors destroy park property. “We don’t want to turn people away, just manage the impact better,” he said. “And we want partnerships, with everybody.”