The pianos are coming.

Starting this fall, as many as 20 pianos will appear in public locations around Beacon as part of a community project called Keys to the City. Any passerby will be welcome to play the instruments, which will be decorated by local artists.

Sculptor Ed Benavente, who had heard about similar projects elsewhere, spearheaded the campaign, which is being organized by BeaconArts and a committee of volunteers that includes Jesse Stacken, Ian Murdock, Akiko Sasaki, Rick Rogers and Linda Pratt Kimmel. 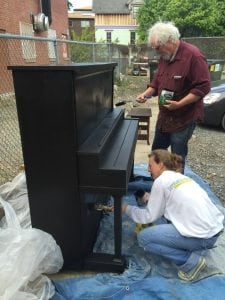 Two volunteers paint the piano used at the Open Studios kick-off party when Keys to the CIty was announced. (Photo by Ed Benavente)

Already the pianos are rolling in. Ten have been donated, with one unveiled at the kick-off party for Beacon Open Studios in May at the Oak Vino Wine Bar. “People were curious, immediately,” Pratt Kimmel says of the piano, which has since been placed at the Beacon Visitors’ Center on Route 9D. “Lots of people played it.” A piano was also brought to the Beacon Farmers’ Market on July 9 to promote the project.

The pianos are being stored at various community spaces, where those that are playable will be painted and accessorized by artists and groups such as the Beacon Green Teens and campers from Beacon’s summer program. (Those that aren’t playable will be broken down for parts.) The plan is to have the instruments in place by Second Saturday on Sept. 9 through at least Second Saturday on Oct.14. 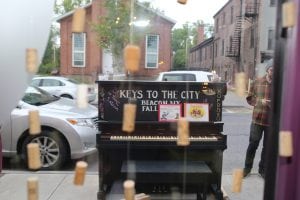 The first Keys to the City piano appeared at a May kick-off party celebrating Beacon Open Studios, seen here through the hanging cork at Oak Vino. (Photo by Jon Slackman)

The pianos will be positioned mostly along Main Street, each in some way protected from the elements, with one at the University Settlement campus during the Beacon Independent Film Festival.

There will be some scheduled concerts, says Pratt Kimmel, but the committee is aiming for spontaneous performances. The goal, she says, is to raise awareness and money through BeaconArts for music education and access to the arts. 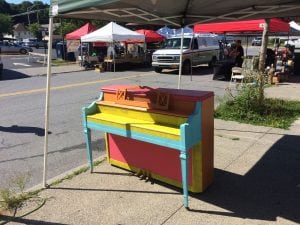 A piano waited to be played at the Beacon Farmers’ Market on July 9. (Photo provided)

The committee is soliciting tax-deductible donations for expenses. Those who donate $200 or more can have their own or business name placed on a piano. At the end of the installation, most of the pianos will be scrapped. One or two that are kept indoors during the project, if they survive two months of public play, will be donated to groups that make a request. “The more playable, the more protected,” Pratt Kimmel explains.

For more details, see facebook.com/keystobeacon. To donate a piano or funds, or to decorate an instrument, email [email protected]