Eliza Starbuck and Eric Wirth, both Brooklyn transplants to Cold Spring, were each ready to start new careers. She had been in fashion design, and he worked for years in publishing. They mulled over ideas.

“We thought of things that weren’t here: hats, shoes,” Starbuck said. They considered what they missed about their former homes, and realized it was places that brought the community together: grocery stores, video stores and wine shops.

From that grew Flowercup Wine, which opened three months ago on Main Street. The name came from a drawing Starbuck made of a “flower rooted to the earth,” which doubled as a “beautiful goblet of nectar,” she says. Wirth took one look at it and said, “Flowercup.” 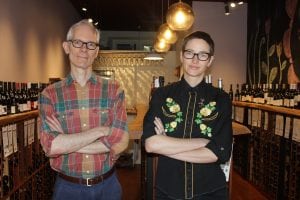 Eric Wirth and Eliza Starbuck (Photo by A. Rooney)

Before they jumped in, they spent six months studying the area’s demographics. After all, there are already established wine shops in the Highlands, such as Yannitelli’s in Cold Spring, Artisan in Beacon and Viscount on Route 9 in Fishkill — but by their calculations, there is room for all.

Plus, they both love wine.

“The more you know, the more you find out what you don’t know and want to learn,” Wirth explains. 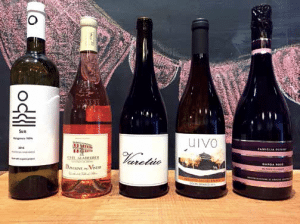 Starbuck grew up in Cincinnati in a household that was passionate about wines, she says. She moved to New York City at age 18, studied at Parsons and spent 14 years in the fashion industry. She moved to Cold Spring after her daughter was born in 2010 but found herself wanting to spend less time commuting on the train and move time exploring her new home.

“I loved the community, walking down Main Street, and realized I wanted to participate in the dream of living local in a walkable community,” she says. 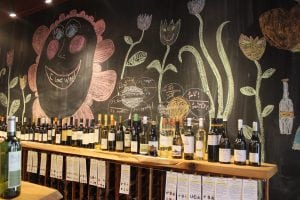 A chalk mural drawn by Starbuck’s daughter covers one wall. (Photo by A. Rooney)

Meanwhile, Wirth, after 30 years of working in the publishing industry in Manhattan, moved to Cold Spring in 2009. After several years of commuting, he says, “I no longer wanted to do office work.”

Once they decided on a business, Starbuck and Wirth spent six months going to “portfolio” wine tastings in the city, where they could sample from any of thousands of bottles.

“We tried well over 3,000 wines to get to the 150 we have on the shelf,” Wirth says. “There are wines all over the world you can’t get — some don’t leave the tasting room — but we’ve been able to get most of what we wanted.” For local wines, such as those from the Finger Lakes, they’ll drive themselves to buy cases. (In fact, Flowercup will be closed from Aug. 7 to 10 while they make a trip north.)

“We want Flowercup to be well-rounded, and also to have our slant, our creative interpretation, so that the selection and the shop has a personality,” Wirth says. Starbuck says the two are also “working hard to find the best values, so often this leads us to less established regions where perhaps there’s less marketing muscle.” 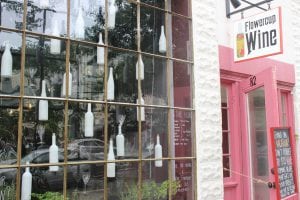 They also look to places not traditionally known for their wines. “There’s been an explosion of development in new regions, where there’s a real passion for it: for example, Slovenia, Croatia — they’re thinking in new ways about wine,” he says. “There are multiple blogs on eclectic, rare finds. You get little pieces from here and there and patch them together to tell the story. Our bottles tell stories.”

Each wine in the attractive shop has its story written on a tag that goes beyond the typical three-adjective sentence unleashed by many wine retailers. “Most people don’t know a lot about wine, but they know they like it,” Wirth says. “We’ve worked hard to describe the flavor, the style, how it was made.”

Starbuck adds that “for the strict traditionalists, we look for the best examples” of wines such as Sancerres, Sauvignon blancs and pinot noirs. 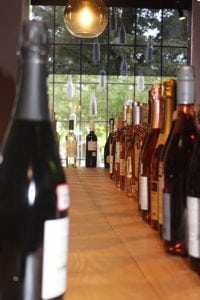 Wines at Flowercup (Photo by A. Rooney)

The shop itself was designed and constructed by Starbuck and Wirth; the countertops came from a tree salvaged by Starbuck. Her daughter, now 7, created the sprawling, flower-themed chalk mural that fills one wall.

While most bottles are priced at $20 to $30, Starbuck says they work hard to find “fantastic bottles between $10 and $15 so people can dip their toe in. There’s a lot of bad quality wine at that end, which turns people off. If you buy a $10 bottle from us, it’s the best you can get for that price.”

2 thoughts on “Wine on Main”