New members sought with a ‘want to help’ attitude

Members of the Cold Spring Lions Club, chartered in 1939, are not prone to boasting; they prefer to get out and get the job done.

Some of its 35 members can frequently be found quietly helping out at highway and riverside clean-ups; assisting at the Philipstown Food Pantry; fundraising for scholarships and disaster relief and assisting the visually impaired, which is the parent organization’s traditional mission. 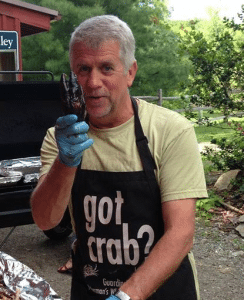 Its largest fundraiser, the annual pig roast, will be held on Sept. 16 at the Taconic Outdoor Education Center, off Route 301 east of Cold Spring. It also hosts a Fourth of July beer tent, an annual Shredder Day in April, and sells wallet cards for $10 that provide discounts at a number of local businesses. (They can always be found at the Desmond-Fish Library.)

On Aug. 12, the club will host a potluck for the 40 clubs from the region, which includes Westchester County, to celebrate the centennial anniversary of the international Lions, formed in Chicago in 1917.

New members are always welcome, but club officials say its twice-monthly meetings are check-your-politics-at-the-door. One meeting each month is for business and the other for business and dinner (often at Cathryn’s Tuscan Grill).

Ted Rathjen, president of the Cold Spring club, says the club is filled with “wonderful people” and that members are always on the lookout for recruits. “New people have a lot of enthusiasm and can give a different perspective to what we do,” he says. “We’re getting more retirees — people from their 50s through 70s, which is great — but I would love to attract younger people, too. Millennials to seniors would broaden our spectrum.”

The Beacon Lions, founded in March 2016, has 23 members and meets on the third Saturday of each month at 1:30 p.m. at the Howland Library.

In its 15 months of existence, the club has partnered with various community groups, including Comite Mi Gente and the Dutchess County Office of the Aging, and has supported participation in the Hugh O’Brien Youth World Leadership Conference and the City of Beacon Police Academy. It plans a food drive for the city’s pantries and in September will host a fundraising luncheon at the Outback Steakhouse in Wappingers Falls.

For information, call Helen Reynolds at 845-401-4725 or visit facebook.com/beaconlionsclub.

Both Rathjen and his predecessor, David Lilburne, co-owner of Antipodean Books, Maps & Prints in Garrison, emphasize that every cent the club collects for charity is distributed, because it has no overhead.

“We’re a club that makes money to give it away,” Lilburne says. “Once we get past raising money, we’re hands-on.” The club determines which local projects to support but also sends money to the parent organization for national and international charities. 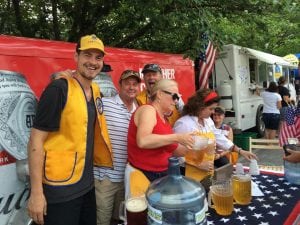 Selling beer at Community Day in 2016

Lilburne says when he became a Lion around 1982 only a few people were involved. “What’s good about this organization is that you can take the lead on something that’s important to you,” he says. “The Lions can be whatever you want it to be.” One of his favorite projects, he says, is the twice-yearly Route 301 clean-ups.

Another Lion, Curt Landtroop, notes that hunger is an important issue for the group, which last year donated $4,000 to the Philipstown Food Pantry. 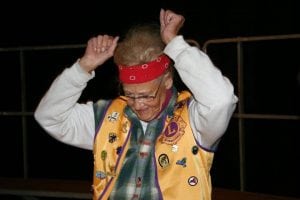 The late Betty Budney was an active, and popular, Lion.

The Lions’ traditional focus on assisting the visually impaired came out of a call in 1923 by Helen Keller for “knights of the blind.” The Cold Spring group partners with Guiding Eyes for the Blind, a guide dog school in Yorktown Heights. It also recently raised $10,000 for VISIONS Center on Blindness in Rockland County, a residential and vocational training service for the blind.

In addition, when students need eye tests and glasses and have difficulties affording them, the nurses at Garrison and Haldane schools contact the Lions for funding. 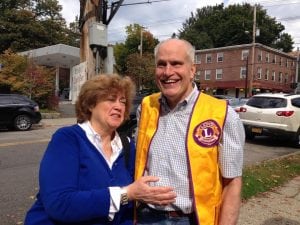 “There’s no project we won’t consider,” says Lilburne. “We’ve done everything from fixing up houses with ramps, to helping someone who was teaching the visually impaired in Nepal after the earthquake there.”

The Lions also maintain donation bins for used eyeglasses behind Yannitelli’s in Cold Spring, at M&T Bank in Cold Spring and at the Desmond-Fish Library in Garrison. The challenge lately, says Lion Sylvia Wallin, is finding an optical center that will ship the glasses to recycling centers. Its former partners no longer accept them.

Frank Milkovich, a former Haldane principal and the longest-serving Cold Spring Lion at 48 years, notes that the Lions’ scholarship program began in 1960 and so far has given out a total of $185,000 to high school seniors who live in Philipstown. Milkovich said he is especially proud of the club’s fundraising efforts in tandem with the Lions of Slidell, Louisiana. “At the time of Hurricane Katrina, in 2005, we started a project with the Slidell Lions, spent a year at it and raised $100,000 with a lot of effort.” 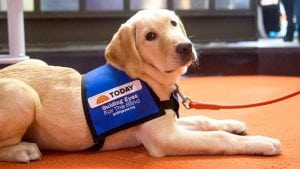 A Guiding Eyes for the Blind dog in training

Milkovich, as membership chair, has created a recruiting pamphlet. “You have to bring in a ‘want to help’ attitude,” he says. “That’s the main thing.”

Rathjen says that the group has been thinking harder about how to attract members, as well as about programming, reconsidering events that “were not well attended or which suffered from burnout, or were outdated.”

“Volunteerism is down, yet the community is what you put into it,” he says. “For a community to work, there has to be a taking care of each other — you should get goosebumps from helping people in need. That’s been lost and it needs to be found.”