What role should residents play in decommissioning nuclear plants?

On Sunday, June 16, 1991 — Father’s Day — lightning struck both the Yankee Rowe nuclear plant in Massachusetts and the Vermont Yankee nuclear plant, about 20 miles to the northeast. It crippled the control room at Yankee Rowe and sent its own sort of shockwave through the surrounding communities: Could the plant pose a greater risk than anyone had thought?

“It was a very serious situation, and it woke people up about the reactor in Rowe,” said Deb Katz, who lived four-and-a-half miles from the plant, and who responded by helping to launch the Citizens Awareness Network (CAN). The grassroots organization advocates the replacement of nuclear plants with renewable energy and empowerment of communities affected by nuclear waste. 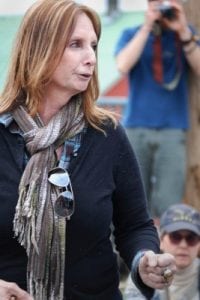 In June, Katz spoke at a forum in the Desmond-Fish Library in Garrison. Organized by the Journal News, Clearwater and the National Resources Defense Council, it focused on the challenges facing the region after the scheduled 2022 closing of the Indian Point Energy Center near Peekskill. Since CAN’s founding, four nuclear plants in New England have been decommissioned.

CAN, along with the Union of Concerned Scientists, was instrumental in demonstrating that the Yankee Rowe plant was unsafe and mismanaged, which led to its closure in 1992. The group thought its work was done, Katz said. “We had shut down our local nuclear power plant and we were all going to get to go back to working in our gardens,” she said. “We didn’t consider ourselves activists, we were just concerned citizens.”

But when the decommissioning process began, Katz realized that the troubles were just beginning for the town of Rowe. For starters, CAN learned that the plant’s nuclear waste would be shipped to poor, rural Barnwell, South Carolina.

As much as the group wanted the nuclear waste gone, Katz says its members didn’t want to see it dumped on another town, much less one that hadn’t benefited from the power the plant generated.

She said CAN next learned that during the decommissioning process, waste was being dumped in the local river, which ran adjacent to schools and farmland. In response, it sued Yankee Atomic, the company that owned the plant, and the federal Nuclear Regulatory Commission for violating federal environmental laws.

It won, with one judge going as far as to compare the NRC to the Circumlocution Office, a satirical invention of Charles Dickens that he used to show government at its most myopic and inefficient.

The victory was short-lived, however, as the NRC responded by changing its rules and, in the process, giving itself, the federal Environmental Protection Agency, state governments and local communities less oversight over the decommissioning process, Katz said. That’s the situation CAN finds itself in while navigating decommissions in Maine and Vermont, and which the Hudson Valley may soon find itself in with Indian Point, she said.

“This is a fight that the Vermont attorney general is now dealing with, because they’re being blocked left and right from getting answers to the reasonable questions they have about how cleanup will take place, what are the finances involved, all the issues of accountability,” she said. “The same is true for local communities, and it’s true for the NRC.”

CAN has been able to convince the State of Vermont to set up a citizens’ advisory panel with representatives from the legislature, communities, the nuclear company, power plant workers, Native American leaders and others. She recommends New York do the same. While the panel does not have the power to make or change laws, it can call witnesses and provide information to the public as the decommissioning takes place. 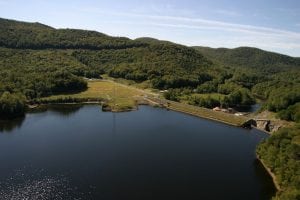 An aerial photo of the Yankee Rowe site taken in 2012, five years after the plant was decommissioned (Yankee Atomic Electric Company)

In the end, the most dangerous waste at Yankee Rowe was not shipped to South Carolina, but low-level waste did go south. “This is the painful reality in dealing with nuclear waste,” Katz said. “There are only bad solutions and worse ones.”

Eventually Katz believes that a “national sacrifice zone” will have to be built to store the nation’s nuclear waste. A similar project has been in the works for years at Yucca Mountain in Nevada, but that plan has drawn criticism because the waste would be stored above the water table and rests on land of cultural importance to Native Americans, among other problems.

“The site has to be based on the stability of the area, not on the vulnerability of the community,” Katz said. “Both sound science and sound ethics will have to be used to find a deep geological burial for the waste, and communities are going to have to be willing and involved in the process.”

With more nuclear plants due to be decommissioned over the next 10 years, Katz said that figuring out how to safely decommission plants will become even more important.

“Ten years ago everyone thought there was going to be a nuclear renaissance,” she said. “But they were wrong. And now we’re going to have to deal with the effects of that.”

What’s Causing Thyroid Rates to Soar?
Leaving Waste High and Dry
Where Will the Jobs Go?
Hard Lessons From Zion