Some people, seemingly without effort, throw parties at which the food, company and spirits are all good.

For two years, friends from Chile who live in the Hudson Valley repeatedly shared their flair.

It started at the baby shower, where Andrea and Rodrigo served their guests a cocktail made with cola and pisco, a colorless brandy with an alcohol content that can rise above 40 percent. One tall slender piscola tasted just right and, had I not been driving home later, two may have tasted better. 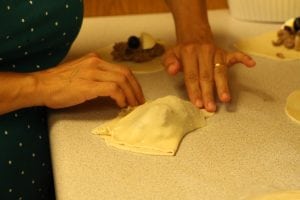 Empanadas, from the Spanish verb empanar: to cover in bread or pastry (Photo by M.A. Ebner)

When Andrea and Rodrigo celebrated their son’s first birthday, we toasted again with pisco. Inspired to mix South American drinks, my husband and I asked Rodrigo where he found pisco (Payless Wine & Liquor in Newburgh) and we began experimenting with pisco sours with freshly squeezed citrus juice.

Last month, before the couple returned to Chile with their toddler son and another baby on the way, Rodrigo made the splashy cocktail while Andrea taught a group of friends how to create traditional empanadas.

“In Chile,” she said, “you always can find empanadas. It’s very typical and we eat a lot of them, out for lunch, at the beach, at home. I’m no excellent cook but I do know a good empanada.”

Her variation, which she credits to her mother Maria, stands up boldly to the savory sort sold at Rincon Argentino in Cold Spring and the flavorful Mexi-Cali-inspired empanadas stuffed with everything from chipotle chicken to kale and sweet potato at Tito Santana Taqueria in Beacon. (I haven’t had a chance to sample at Juanita’s Kitchen in Nelsonville.) 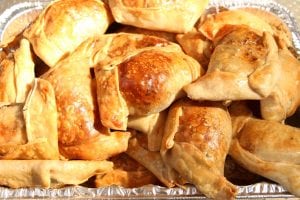 For an empanada like her mother’s, Andrea cooks a spicy filling of beef, onion, garlic and cumin, prepared a day ahead to let the mixture rest.

“This part, the filling, is the most important part,” Andrea says. “You don’t want too much onion or we say, ‘This is no good.’ You taste and taste and taste the filling as you’re cooking and stirring, adding the cumin and some salt, until you find a good flavor.”

These empanadas, empanadas de pino, include spicy beef filling as well as raisins, black olives and hard-boiled egg. The fillers are wrapped with dough made from scratch or purchased in prepared form. For the group assembly, Andrea provided ready-made “discos” packaged by Goya.

To change up your party repertoire, prep the empanada ingredients and invite everyone to join in the assembly while sampling pisco sours. The beauty of this south-of-the-world tasting brings guests together all in good spirits.

Over medium heat, cook onion, garlic and cumin in oil until softened. Add meat and wine. Cook until browned, seasoning with cumin, salt and pepper to taste.

Brush sealed empanadas with egg wash. Bake at 350 degrees for 30 minutes until golden.

Shake pisco, lemon juice, simple syrup and egg white with ice for 20 seconds. Strain into glass and add a swirl of bitters on top of the foam. Serve immediately.