Robert Blair, who lives on Route 9 near Cold Spring, has been organizing estate sales for 20 years. He does four to eight per year.

What led you to estate sales?
Initially it was just to help friends. But I’m also a third-generation collector. My first collecting was in the Sinai Desert in 1964, where I found bottles, ceramic pieces and shards of glass. Today my obsession is American wooden frames from the 19th and early 20th century.

What’s involved with organizing a sale?
It usually takes three weeks to arrange, clean and repair items and two days to price. Each sale is three days — Friday, Saturday and Sunday — and my fee is 40 percent of gross. It’s a handshake agreement. 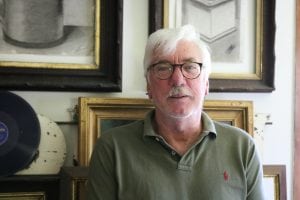 What unusual items have you come across?
A Garrison couple who had lived here for 40 years didn’t realize they had a signed Picasso lithograph valued at $27,000 buried in a closet. I talked them into keeping it. Another Garrison home had cases of wines from the 1940s, ’50s and ’60s in the basement. I didn’t get to sell those.

Has anyone ever bought everything offered at a sale?
I did a sale in Ossining for a member of the rock group KISS. A man bought two pickup truckloads of mostly small items. I’ve never had anyone buy more than that.

Do valuable pieces sometimes go unsold?
An artist once told me that if any of his paintings didn’t sell for at least $2,000 each, they were to be discarded. I had to throw them all out. It was part of our deal. I’ll also usually move an important item to no more than three sales. I once had an 18th-century, Birdseye Maple, four-poster bed valued at about $3,200. It should have been in a museum. I took it to 10 sales before it sold for $275.