Jonathan Reynolds play will be read

John Christian Plummer will direct a reading of Providence, a new historical drama by Jonathan Reynolds, at the Philipstown Depot Theatre in Garrison at 2 p.m. on Thursday, Aug. 17. 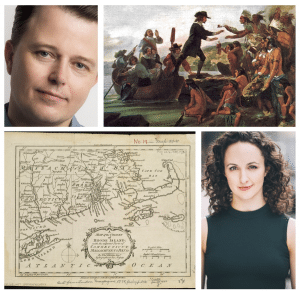 Providence, a new play about Roger Williams (top right) will be read at the Philipstown Depot Theatre on Aug. 17 by a troupe of actors who include Sean McNall and Kate Hamill. (Photos provided)

Set in the late 17th century, the play follows Roger Williams as he flees religious persecution in Europe only to face it again in New England. “It’s about his constant struggle to fight for freedom of expression,” said Plummer.  “And it’s about the 17th century having a conversation with the 21st century.”

The reading will feature Sean McNall, Kate Hamill, Jason O’Connell and Mark Bedard, along with Christine Bokhour, Tibero Saraceno, Gregory Porter Miller, Dan Gonon and Josie Altucher. The suggested donation is $20 at the door; see brownpapertickets.com to reserve a seat.