Wayne Griffin and Leaman Anderson say they’ve been trying for years to “retire” from Beacon Hoops, but until someone steps up to fill their sizeable sneakers, the summer basketball program’s co-founders don’t appear to be leaving the court anytime soon.

About 150 kids participate in the program, which has divisions for boys and girls between 6 and 16 years old. Younger children, from ages 6 to 9, play on Mondays and Wednesdays at Pete and Toshi Seeger Riverfront Park, where there are courts with baskets lower than the standard 10 feet. Ten- to 12-year-olds play on Mondays and Wednesdays at the South Avenue court, and 13- to 16-year-olds play there on Tuesdays and Thursdays.

The cost to participate is kept to a minimum ($50 for Beacon residents and $60 for non-residents). 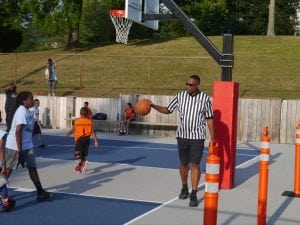 Wayne Griffin, one of the two founders of Beacon Hoops, officiates a game on Aug. 9. (Photo by J. Simms)

“When you talk about pillars of the community, Wayne Griffin and Leaman Anderson are a foundation here,” says Mayor Randy Casale, who is also an assistant basketball coach at Beacon High School. “They’ve made a difference in a lot of peoples’ lives.”

Anderson, 56, and Griffin, 57, founded Beacon Hoops in 1996. As the city’s economy stagnated in the 1980s and ’90s, both had noticed a drop-off in the number of young people playing basketball. As a result, Beacon High School squads suffered as inexperienced players rose through the ranks.

There was a summer youth league in Beacon when they were growing up, Griffin recalls, and it made the city “a mecca for basketball.” The men knew there was still plenty of talent in Beacon’s neighborhoods, and “that’s what inspired me to put back what was given to me as a young man,” Griffin says. 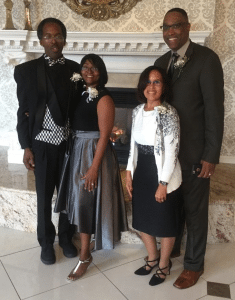 What better way, they reasoned, to bring children back to basketball, and keep them off the streets, than to start them young?

“Somehow we made it work,” Anderson says. “Between Wayne’s family and my family, it’s been nonstop.”

During its heyday in the 1990s and early 2000s, more than 350 children and teenagers took part each summer. Teams traveled to the Highlands from as far away as North Carolina and Virginia to play in tournaments.

“Leaman was like a father figure for a lot of us growing up, and Wayne’s vision for us was ideal,” says Reuben Simmons, who played in Beacon Hoops as a child and returned as an adult to coach. “It was a great thing to give us something to do.” 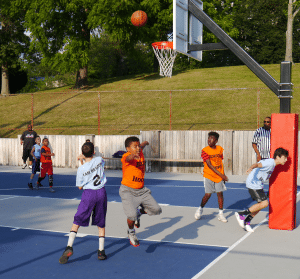 A shot goes up during a Beacon Hoops game on Aug. 9. (Photo by J. Simms)

Simmons, who is also now the city’s highway superintendent and a founder of I Am Beacon, says the men showed him as a child the importance of giving back to your community.

Griffin and Anderson emphasize not only basketball skills but developing a sense of responsibility and values. One example of the importance of fair play is the “three-tech” rule, which has been in effect for years. If a player is assessed three technical fouls over the course of a season, he or she is immediately ineligible for the remainder of the games, no questions asked.

Years ago, Griffin recalled, a star player had received two technical fouls during the season. Just as the second half began in the league championship game, he received his third.

The men faced a tough decision: Do they let it slide with the score close and only minutes left in the season?

They did not. “What we say is what we mean,” Griffin says. “You have to stay within the lines.” 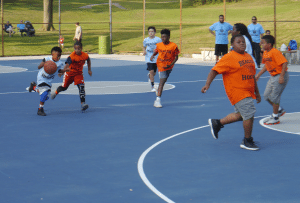 Driving past half court in a game on Aug. 9. (Photo by J. Simms)

Anderson adds: “Now we’re looking to hand it off and teach others the same system. We’re at the stage of our lives where we’re setting up for retirement.”

Until that happens, both remain committed to the program, giving hours of their time to officiate and run the court with players 50 years younger (among many other responsibilities).

“When these kids start at 6 years old and go through the program, they’re indoctrinated in fair play and sportsmanship,” Griffin says. “They get more out of it than just basketball. That’s the reward for me and it’s the reason I’m here.” Unfortunately, however, for his retirement plans, he says, “my nature won’t let me walk away and not let that happen.”