As tourism has surged in Philipstown, so has one form of tourist accommodation: Airbnb, the booking site that lets homeowners turn their residences into bed-and-breakfasts — without the breakfast.

According to data provided by Airbnb, the number of annual bookings in Philipstown jumped nearly 75 percent from July 2016 to July 2017, to 6,800 from 3,900. That includes more than 4,000 bookings in the 10516 ZIP code, which includes Cold Spring, Nelsonville and part of Philipstown, an increase of 90 percent, and 2,800 bookings in Garrison, a 56 percent jump.

Airbnb tells prospective hosts they can earn $650 a week in Philipstown. Yet turning a property into an Airbnb can bring zoning and tax questions as well as income. In addition, homes that are turned into daily or weekly rentals do not always sit well with neighbors.

A recent search showed about 25 listings in Cold Spring and Nelsonville, and another 25 or so in Garrison. Local hosts offer a wide variety of homes and rooms, from basic beds to expensive and expansive estates.

The Airbnb site does not provide addresses but does pinpoint the general location of the property on a map. Listings include:

Richard Shea, the Philipstown town supervisor, and his wife, Karen, own a home at 57 Morris Ave., in Cold Spring, that operates as an Airbnb. They did not respond to a request for comment.

Steve Voloto, a Cold Spring Village trustee, and his wife own a home at 9 Constitution Drive in Cold Spring with an attached annex that he said they have rented through Airbnb for more than a year. 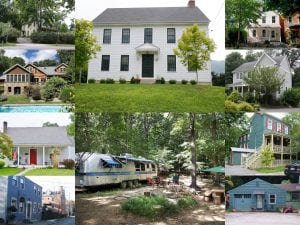 A selection of homes available for rent on Airbnb, clockwise from top left: Chestnut Street; a home owned by Philipstown Supervisor Richard Shea; Church Street; behind Foodtown; Nelsonville; an apartment apparently offered by Cold Spring Trustee Steve Voloto; an Airstream in Philipstown; the Bluehaus on Market Street; Whitehill Place; and a Cold Spring estate for $1,500 a night

Philipstown has three bed-and-breakfasts — the Pig Hill Inn and Hudson House Inn, both on Main Street in Cold Spring, and the Bird & Bottle Inn off Route 9 in Garrison — and Putnam County has motels, but no hotels. In her State of the County address in March, Putnam County Executive MaryEllen Odell endorsed Airbnb, saying that “until we get a hotel, we need Airbnb so that Putnam County can go from a day-cation to a stay-cation destination.”

In a forthcoming article, The Current will look at the growth and legality of Airbnb rentals in Beacon, where listings jumped 62 percent and the number of hosts increased by 40 percent from July 2016 to July 2017.

Philipstown’s most recent comprehensive plan, completed in 2006, called for more accommodations to attract tourists, but said they should be “built to a scale and esthetic appropriate to the town, such as bed-and-breakfasts and small inns.”

Similarly, Cold Spring’s comprehensive plan, from 2012, encouraged “an increase in the number of overnight accommodations” by permitting bed-and-breakfasts throughout the village.” It likewise proposed the creation of a management and marketing program much like what Airbnb provides.

Guests make and pay for bookings through the Airbnb website; the service, founded in 2008, takes 3 percent of the price as its fee. After arrangements are finalized, guests receive the home’s address. Unlike bed-and-breakfasts, Airbnb establishments typically do not provide meals.

Cold Spring’s code considers a bed-and-breakfast to be a “tourist home,” defined as “a dwelling in which overnight accommodations, consisting of not more than three rooms for such purpose, are provided or offered for transient guests for compensation.” It does not mention breakfast.

Before opening a tourist home in a residential district, the code states that property owners must pay $500 and apply for a special-use permit (valid for one year but renewable); provide plans for review by the Zoning Board of Appeals and the Planning Board; undergo a public hearing; and supply one parking place for each guest room. It also restricts tourist homes in residential districts to parcels located along state highways, which in Cold Spring means Route 9D and Route 301. 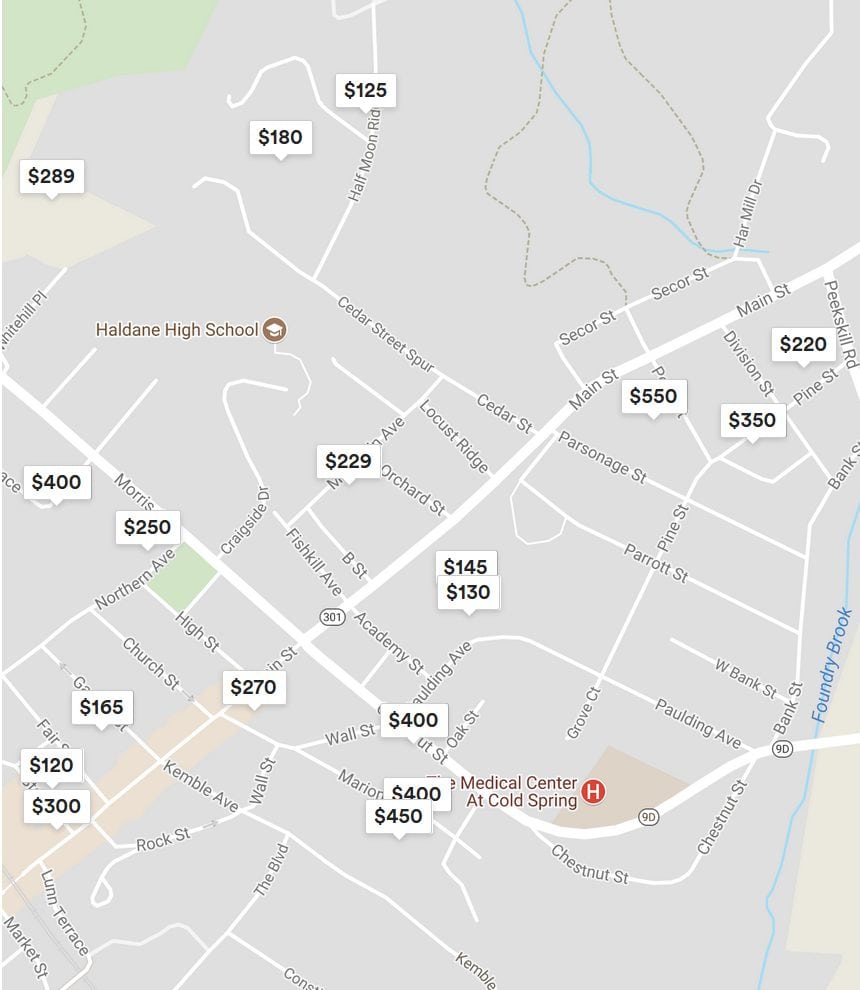 Listings in Cold Spring during a recent search

The restrictions on tourist homes in the business district are less stringent.

Despite the proliferation of Airbnb rentals, Cold Spring Village Clerk Jeff Vidakovich said the village has received no applications for tourist homes since late 2015, aside from one later withdrawn.

In 2016, the Cold Spring Code Update Committee proposed that the village redefine “tourist home” as “overnight accommodation,” require that the owner live on the premises; ban renting out any more than three rooms; forbid separate cooking facilities; allow them on streets other than state roads; and require fire inspections.

“Although the current village code does not mention Airbnb, properties that are marketed on Airbnb are equivalent to tourist homes,” said Trustee Marie Early. “These properties should conform to the current code.” If they fail to do so, she said, it raises the question: What does the village do about it?

“The village is not actively doing anything or attempting to find out where they are, not doing anything to confront the owners,” she said. But when a complaint is received, Greg Wunner, the building inspector for Cold Spring and Philipstown, investigates, she said. Wunner did not respond to requests for comment.

Trustee Voloto said he does not believe that the Cold Spring law on tourist homes covers Airbnb.

“It’s a different animal than what’s on the books,” he said. However, he explained, “I’d be for some type of a charge” or village permit process for Airbnb establishments. Likewise, he proposed that rental structures should meet basic standards and not consist of a shed on a lot somewhere, and “having it be owner-occupied is a must.”

At the very least, he suggested, Cold Spring should require that Airbnb owners live nearby in the village. He also expressed concerns that too many uncontrolled rental operations could burden the village infrastructure.

Nelsonville’s village code allows “the letting of rooms” to up to two guests at a time, as long as the owner lives in the house. It prohibits cooking facilities in guest rooms, although an owner can offer breakfast or other “board” and allow guest access to the home’s kitchen.

Philipstown’s zoning code, last updated in 2011, allows bed-and-breakfasts nearly everywhere, with Planning Board approval. It defines a bed-and-breakfast as “a dwelling in which overnight accommodations not exceeding five bedrooms and breakfast are provided for transient guests for compensation.” 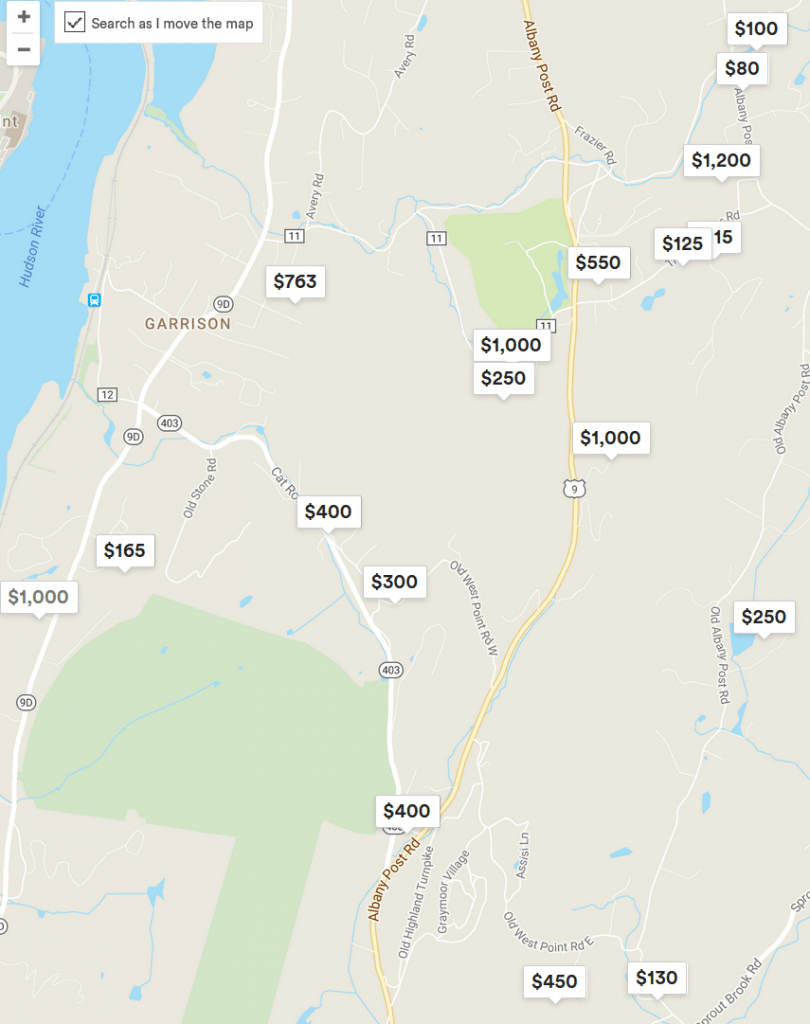 Listings in Garrison during a recent search

However, the town code also provides for “lodging facilities,” which it defines as hotels, motels, inns, or any “other establishment providing sleeping accommodations for transient guests, with or without a dining room or restaurant, excluding bed-and-breakfast establishments.” It allows lodging facilities only in districts designated as Hamlet Mixed-Use (such as Garrison’s Landing) and Highway Commercial (Route 9 corridor), as well as Institutional Conservation (historical or open spaces) and Hamlet Residential (such as Continental Village) with special-use permits.

A review of Planning Board records from mid-2011 through July 2017 found no mention of applications for lodging facility approvals or permits.

Early said that in addition to posing legal questions, opening a tourist home without approval deprives a municipality of income from permits and, unless the host collects sales tax from guests, deprives the state and Putnam County of revenue. That means, she said, that civic projects sales tax could fund must rely on  other sources, like property taxes.

Andrew Kalloch, a lawyer with Airbnb, said the company advises its hosts “of the need to comply with local laws.” Moreover, he said, “Airbnb supports nuanced regulations and is eager to work with communities across New York state to craft common-sense policies that foster responsible home-sharing.”

Kalloch said Airbnb supports legislation in Albany to “allow Airbnb to collect sales and lodging taxes on behalf of our Empire State community,” as it does in Vermont, Connecticut and Pennsylvania.

Airbnb’s site provides a host’s reference guide to local laws, organized by state and county. It collects a 4 percent hotel, or room, tax for hosts in Dutchess County but not Putnam, which does not have one. Asked about this by the Journal News in 2015, Odell said, “How do you have a hotel tax when you don’t even have a hotel?” She earlier vetoed a bill to ask the state to allow Putnam to impose a room tax because she said it would discourage hotels from building in the county.