But unclear if any Highlands doctors ‘certify’ patients

New York State continues to ease its restrictions on medical marijuana, hoping to add more patients to a registry of those who can consume the drug for a limited number of severe illnesses. The number of patients jumped nearly 75 percent after the state Department of Health approved its use three months ago for chronic pain.

To obtain medical marijuana in New York, a patient must be “certified” by a doctor, nurse practitioner or a physician’s assistant working under a registered doctor. The patient then receives a photo ID card that allows him or her to obtain a 30-day supply at a dispensary. The closest dispensaries to the Highlands are in Kingston and Yonkers, although one will soon open in Wappingers Falls.

There are currently 26,561 certified patients in the state, including 176 in Putnam County and 551 in Dutchess, according to health officials. 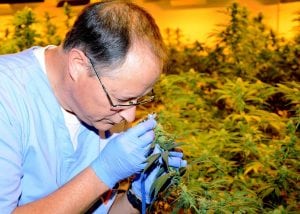 Cultivator Chuck Schmitt examines a plant in November 2015 during the first harvest by Vireo Health of medical marijuana plants at its facility in Perth, New York, northwest of Schenectady. ( Photo by Marc Schultz/The Daily Gazette)

The New York law, which went into effect in January 2016, allows residents with certain serious conditions to obtain marijuana in pill or liquid form that be applied to the tongue or inhaled through a vaporizer. The state health department has proposed allowing ointments, lozenges and chewable tablets, which could happen as early as Sept. 23, following a 30-day public comment period.

Kate Hintz, a state coordinator for the advocacy group Compassionate Care NY, says this may have come about because of the addition of chronic pain patients to the program. “They are used to having a variety of medications to choose from,” says Hintz, who lives in North Salem. “It’s discouraging that it’s not more accessible and inexpensive, because it could reduce the use of opiates.”

The only method of consumption specifically excluded under the state law is smoking. Patients also may not grow their own.

The state Health Department earlier this month authorized five companies to grow, process and dispense the drug, bringing the total to 10, and expanded the number of dispensaries allowed from 20 to 40. The new firms include Citiva Medical, which says it will open a dispensary in Wappingers Falls, and Valley Agriceuticals, which has plans for a dispensary in Dutchess County. State law also allows home delivery, although no companies serve the Highlands.

The law expires in 2021 unless renewed by the Legislature. The governor can end the program at any time if he judges it to be a risk to public safety or health.

The state health commissioner, Dr. Howard Zucker, has so far declined to approve its use for Alzheimer’s disease, muscular dystrophy, dystonia or rheumatoid arthritis. He also has not approved its use for post-traumatic stress disorder, although a bill to add it has passed the Assembly with support from veterans’ groups.

The chief obstacle for most New York patients, said Hintz, is that the drug is too expensive. “The Health Department likes to talk up the number of registered patients, but how many are actually making purchases, and how many are getting refills?” she said. “I’m being optimistic thinking it’s 50 percent. The medicine is grossly, excessively expensive. I heard from patients who say they could only afford the first 30 pills.” 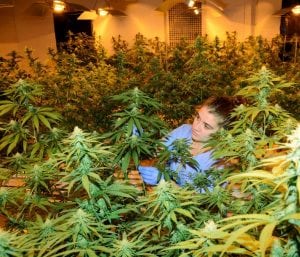 She cited a patient in the Highlands who has epilepsy and is certified to receive medical marijuana. The dose recommended by her doctor cost her $1,000 a month at the dispensary in Kingston (insurers do not cover the drug). When the woman’s doctor suggested raising the dose a bit, the cost jumped to $2,000 per month, Hintz said. “It’s breaks my heart. Who can afford $1,000 a month?”

Nevertheless, Hintz says she is cautiously optimistic. “New York has vested a lot into its program at this point, and we are moving in right direction,” she said. “But we need to get the medication more affordable, quickly. I know hundreds of patients wanting to buy the products. Can we meet in the middle somewhere?”

Once approved by the state to recommend marijuana to patients, practitioners may “opt out” of being identified in a directory posted at cannabis.ny.gov/. They also can remove their names from a list accessible by other registered practitioners. Only the Department of Health has the complete roster.

Although no practitioners in the Highlands are on the public list, two doctors in Carmel, Dr. George Gorich, who is affiliated with the Putnam Hospital Center, and Dr. Eric Teitel of the Hudson Valley Center for Digestive Health, say online they can certify patients.

In Wappingers Falls, Dr. Gladys Cardenas and two nurse practitioners at StartNew Medical are on the public list, as are three doctors in Newburgh — Dr. Glen Kay of Omni Medical Care, who offers online consults (New York is one of five states that allows this); Dr. Paul Saladino of Cross Valley Health & Medicine; and Dr. Riaz Chaudhry, a pulmonologist.

In denying a Freedom of Information Law request from The Current for a list of practitioners who can certify patients in Putnam and southern Dutchess but are not on the public list, the Department of Health said revealing those names might put lives in danger. It argued that marijuana users who incorrectly believe doctors keep weed in their offices could show up with weapons, citing news reports of armed robberies in California in 2009, 2010 and 2013.

Practitioners who remain anonymous may be exercising due caution for another reason. Marijuana is illegal under federal law. While the Justice Department has taken a hands-off approach, Attorney General Jeff Sessions has asked congressional leaders to overturn a rule that prohibits the agency from prosecuting doctors and patients in the 29 states that allow medical marijuana.