Gen. Robert E. Lee and others are USMA alums

He graduated second in his class of 1829, won praise for his prowess during the Mexican War, and served as its superintendent from 1852 to 1855. But Robert E. Lee still generates mixed feelings at West Point, according to a professor there. 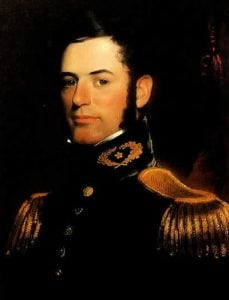 Lee in 1838, when he was a 31-year-old lieutentant overseeing U.S. Army engineers

With 26 years of Army service, including assignments as a squadron commander in the 82nd Airborne Division and a Balkans operations planner with the Allied Forces of NATO, the colonel brought both a field officer’s and historian’s perspective to the topic, “Gentlemen Warriors or Traitorous Scoundrels? West Point’s Memory of Robert E. Lee and the Confederate Generals,” in a lecture at the Foundry School Museum.

He also spoke as someone raised in the South, accustomed to seeing a wall decorated with the Confederate flag and pictures of Lee and Gen. Thomas “Stonewall” Jackson, who, like Lee, graduated from West Point.

As a veteran soldier, “I can’t imagine being in the Army as long as Lee was” and then joining an enemy force, Seidule said. He expressed agreement with 19th-century officers who, after the war, thought West Point “should memorialize those who fought for America and not against it.”

An early view of West Point

The issue of how to treat West Point men who fought for the Confederacy proved contentious for 40-some years after the Civil War ended in 1865, with repercussions lingering well into the 20th century, Seidule noted. Friction arose when President Richard Nixon wanted to install a monument to Confederate officers at West Point. The then-superintendent managed to avert the plan, in part by consulting African-American cadets, who in turn conferred with African-American officers, and demonstrating the inherent problems in such a move, Seidule said.

Around 1890, the academy did complete a magnificent monument to Union dead, inscribing 2,230 names. However, cadets from the former Confederacy promptly dubbed it “the monument to southern marksmanship,” he recalled. Sectional strife arose even before the election of Abraham Lincoln in 1860, Seidule said. “West Point, on the eve of war, was more violent and divided than at any point in its history.”

Alumni subsequently fought on both sides in 55 of 60 battles and the academy contributed 400 generals, again on both sides, according to the West Point website. Prominent northern political figures attacked the academy “as a house of treason” and den of traitors worse than anything “since Judas Iscariot’s time,” Seidule said, quoting contemporary sources.

Nonetheless, while many Southern sons of West Point went with the Confederacy, 162 others remained loyal to the Union, Seidule pointed out. One example, Gen. George Thomas, a Virginian like Lee, became the “Rock of Chickamauga” for his fortitude and courage. Some criticized their Confederate counterparts, making such comments as, “You are abrogating your oath” and “Treason is treason,” Seidule said. “Until 1902, West Point neither forgot nor forgave.” 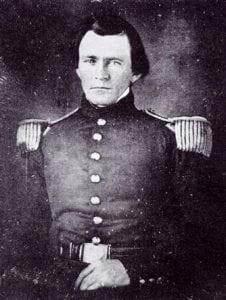 But attitudes had begun to thaw. Former Confederate Generals Joseph Wheeler and Fitzhugh Lee, both West Point graduates, served in U.S. forces in the Spanish-American War in 1898, promoting reconciliation. Likewise, Congress increased funding for West Point, “to recreate its physical and, more importantly, its political image,” the colonel explained. Finally, in 1902, centennial celebrations at the academy included an apology from Confederate alumni, he added.

Now, Lee’s portrait hangs at West Point with that of Gen. Ulysses S. Grant, West Point class of 1843, who ultimately defeated him. Ironically, “Lee had a huge affinity for West Point” while “Grant did not like his experience” there, despite being known for his superb horsemanship, Seidule observed.

Lee’s ties in the area extended across the Hudson during his tenure as superintendent of West Point. According to biographer Douglas Southall Freeman, “Lee was a frequent guest in the home of Gouverneur Kemble, at Cold Spring, and there he probably met ex-President [Martin] Van Buren, his old commander General [Winfield] Scott, [historian] George Bancroft, and others of like distinction.” Kemble established the West Point Foundry, located in Cold Spring but named for its cross-river neighbor, with which it maintained a close working relationship.

Seidule mentioned the contributions of another West Point graduate, famous locally if not nationally: Robert P. Parrott, a Foundry executive and Cold Spring resident, who perfected the concept of the rifled cannon for American ordnance. His creativity aided the Union victory. “Our history has long been intertwined,” Seidule said.

One thought on “From the Archives: West Point and Its Confederate Grads”