Dealers stay one step ahead with shifting recipes

Putnam County is making another push to ban the sale and possession of synthetic illicit drugs. But like the compounds themselves, it’s not as simple as it might seem.

During the County Legislature’s Health Committee meeting on Aug. 9, Shannon Brady, a senior deputy county attorney, noted that Westchester County in May banned the sale of synthetic drugs by amending its consumer protection code.

Synthetic drugs, also known as designer drugs, are already illegal in Putnam. But a ban would specifically define the drugs covered by the law. The Westchester statute names particular drugs, such as K2 and Spice, and includes generic descriptions of products marketed as tobacco, potpourri, herbs, incense or aromatics that contain specific chemicals.

Use of these products has been associated with severe agitation and anxiety, seizures, intense hallucinations and psychotic episodes, among other symptoms, according to the American Association of Poison Control Centers, whose members have taken more than 1,200 calls so far this year about synthetic marijuana. 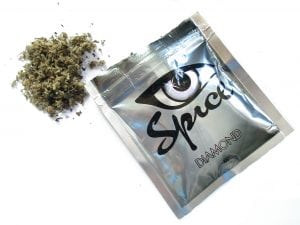 Spice and K2 have become generic names for synthetic marijuana.

Under the Westchester law, anyone caught selling or possessing synthetic drugs that have the same effect as pot, cocaine, heroin or other illegal drugs faces civil penalties of up to $2,000. A second violation would be a misdemeanor.

However, putting a law on the books in Putnam County isn’t so simple. “We don’t have our laws set up the same as Westchester,” said Brady. “There are a number of areas we would need to hear from in order to get our law focused.”

She suggested bringing together law enforcement, health officials and the Office of Consumer Affairs. Mike Piazza, commissioner of social services and mental health, asked that he be involved, as well.

When the topic was discussed at a Health Committee meeting last year, Joseph DeMarzo, Piazza’s deputy, explained that it would be difficult for the county to come up with an ordinance to ban synthetic drugs because manufacturers change the chemical makeups frequently to sidestep bans.

It also could create liability, he said. For example, if a retailer was cited for selling a product but its chemical compound did not exactly match what was banned, the owner could take action against the county.

“There are so many compounds — you’d have to ban incense,” he said.

While there are state and federal efforts to control designer drugs, the problem — at least in Putnam — is figuring out who would enforce a ban, especially when most of the drugs are sold online.

“The governor made a big to-do about banning synthetic drugs,” said Barbara Scuccimarra (R-Philipstown). “Does he expect the health departments across the state to do it?”

Scuccimarra said it fell on county lawmakers to address the problem. “We have a problem with drugs in this county, and any way we can help with education and enforcement is necessary,” she said.