Putnam County released its draft list of 946 men for the war, with the first 240 names ordered to report to Carmel in groups of 60 for examination. The county’s quota for the first army of 687,000 was 97, although the county Board of Supervisors argued the calculations were incorrect and the number should actually be 67. (Before the end of the month, it was raised to 102.)

On July 30, Elizabeth Parker, an 11-year-old student, drowned in the Hudson opposite the coal dock at Garrison. “By those in the know, it is stated that the river-bed slopes out for a distance of about 20 feet, then breaks off abruptly to a depth of almost 50 feet.”

The Cold Spring Board of Trustees noted it had been instructed to “obtain the numbers of automobiles exceeding the speed limit in the village” to report to the state so it could revoke licenses. The board also gave notice that all dogs found without a muzzle “will be shot by the police officer.” 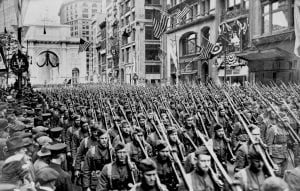 Soldiers march on Fifth Avenue in New York City during the spring of 1919.

Dr. Clark informed the Board of Trustees that there were six cases of measles and two cases of whooping cough in the village.

Because of the heat during the first week of August, village businesses closed on Monday, Tuesday and Wednesday.

Jesse Starr and William Conklin were brought before Justice Logan, accused of attacking John Carey while he was milking and leaving him with six long cuts on his head. Officer Reilley placed the accused in Town Hall.

Four men were gathering hay at the Nellie Hustis place when a bolt of lightning struck a locust tree. One man had his shoes knocked off and two were severely burned.

A young woman stopped in town on her way to San Francisco by bicycle. Helen Louise Murphey, 20, is hoping to win $5,000.

A party of picnickers at the foot of Indian Brook Falls were startled when a boulder crashed among them. It had been pushed off the parapet of a private road overlooking the falls.

Pvt. Keith W. Livermore, 19, of Garrison, was killed in Vietnam on Thursday, Aug. 17, according to a telegram received by his parents from the Defense Department.

Mayor Roger Chirico and the Board of Trustees approved the design for the restoration of the Cold Spring dock. The mayor also accepted a $24,000 check from Metro-North as part of its first payment toward the project.

Butterfield Hospital opened its new emergency room. The facility is twice the size of the old E.R., with four bays, an isolation room, and a waiting and registration area, each with what staff members describe as “modern, uplifting décor.”

A fugitive from California was apprehended in the woods near Putnam Valley on Aug. 10. He was wanted in connection with a brutal home invasion.

On Aug. 18, county sheriff’s deputies discovered a corpse in a wooded area of Garrison. The body is believed to be that of a Manhattan man who was reported missing about two weeks earlier.

6 thoughts on “Looking Back in Philipstown”