What happens when you are pollinator-friendly

When I moved to my spot in the woods, there wasn’t a lot of landscaping. The few things that had been done seemed designed only to survive the deer. It was overgrown to the point of blocking walkways. The only spots of color were a wild patch of day lilies that harbored snakes and some lovely peonies I’m grateful to have.

What these plants had in common was there aren’t any insects, birds, or other wildlife that could use them for habitat or food. The exception is Japanese barberry, which does have birds that will eat its berries, but that isn’t a good thing since that helps it spread.

Seven years later, I’ve spent backbreaking hours reclaiming the patches of ground; in some cases, this involved hiring a backhoe.

This summer I hit a new peak of pollinator- and bird-friendly habitats. I’m even seeing monarch butterflies for the first time, attracted to the butterfly weed (Asclepias tuberosa) a.k.a. “the orange one” (the other native milkweed is purple). 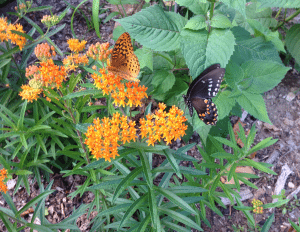 A black swallowtail and a great spangled fritallary agreed to be photographed for this column, but no monarchs. (Photo by P. Doan)

One flowerbed is in bloom with stately and long-flowering Rudbeckia and Penstemon varieties and yarrow. A strip of mountain mint, spearmint and oregano is marked with stalks of tiny white flowers. Another area has hyssop, Monarda, milkweed, Veronica spicata (speedwells), asters, cosmos and sedums in bloom. The globe thistle, Joe-pye weed, phlox, Echinacea, Coreopsis, hostas, meadowsweet and rose of Sharon blossom from another part of the yard.

In short, everywhere I look, the landscape is alive.

I’ve observed seven kinds of bees and wasps visiting the flowers, hummingbirds stop by regularly, and I’m constantly trying to capture photos of the many butterflies and moths. The goldfinches love the Joe-pye weed and globe thistle. Catbirds are living in a thicket of Viburnum trilobum, a native woody plant with red berries that are disappearing fast.

My toddler’s idea of a flower is one with a bee or butterfly crawling over it and we have a lot of fun telling stories about them, where they live and why they like the flower.

Seeing the life and vitality of these efforts deepens the joy I feel in what I’ve created. It also benefits the vegetable garden. My tomatoes, squash, cucumbers, peppers and berries need pollinators and by creating a bountiful place to hang out, I’m guaranteeing a harvest. When it comes to crops, it’s “no bees, no food.” 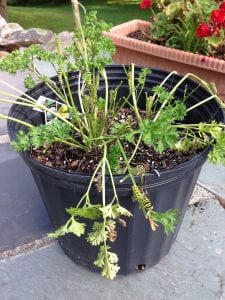 Pollinators are responsible for 35 percent of global food production, according to a 2016 report by a group affiliated with the U.N. But nearly 10 percent of bees, butterflies, moths and bats (also pollinators, as well as effective mosquito munchers) are nearing extinction, and monarch butterfly populations have declined so far they have been considered for endangered species status.

The threats to pollinators’ survival are numerous and many of the factors are within our control. Adding pollinator-friendly native plants to the landscape is one step (see nativeplantcenter.org). Eliminating the use of pesticides and herbicides is another. Supporting organic crop growers shifts your food dollars away from commercial farms that have eliminated areas for wildflowers and spray their crops with chemicals that poison bees.

Climate change is causing earlier bloom times, changing habitats and creating threats to the trees and plants as pests and pathogens spread. For example, apples and other fruit and flowering trees in New York are blooming an average of eight to 10 days earlier than they did decades ago. This causes shifts in the ecosystem with uncertain consequences.