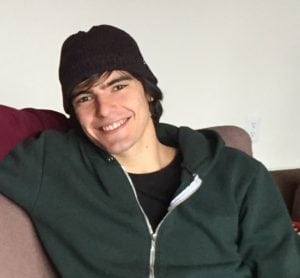 Born Dec. 2, 1993, Forrest was the son of Aleta Wolfe of Garrison and Albert Ryzy-Ryski of Cold Spring. He attended The Masters School in Dobbs Ferry for two years and graduated in 2011 from Haldane High School. At the time of his death, Forrest was studying English literature at Kennesaw State University, about 20 miles northwest of Atlanta. A mixed martial-arts fighter, he trained at Stryker Fight Center in Kennesaw.

He also was a gifted musician and artist. While a senior at Haldane, he won first place as an Emerging Artist from the Putnam Arts Council. He also won the Rising Star Award for visual arts at the Haldane Fine Arts Awards and was recognized for his creative writing and songwriting. He was accepted into The Oxbow School in Napa, California, a semester program of studio artmaking and interdisciplinary humanities.

Forrest studied classical guitar from the age of 10 and composed and performed music, and gave lessons to younger students. He also performed his composition, Clearly, at the Haldane High School talent show and joined two classmates in a harmonized version of “Helplessly Hoping,” by Crosby, Stills and Nash.