When David Dixon placed the artwork for a group show on exhibit at 18 West Main St. in Beacon, he knew there was only one place for his own pieces — in the darkest corner.

“If I put anyone else’s piece there, it wouldn’t be acceptable,” says Dixon with a laugh. The exhibit, Leaving Home, a project of the Brooklyn-based collective Cathouse FUNeral, will be on display from noon to 6 p.m. Friday to Sunday through Sept. 10. (After the show departs, the space will be remodeled for retail.) It is anchored by a model of Christopher Columbus’s ship Santa Maria that Dixon’s grandfather built in 1926. 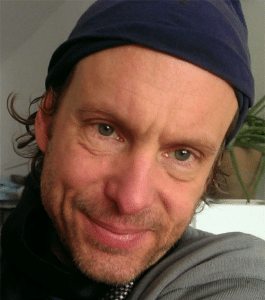 The darkness in the cavernous room is a feature, not a bug, that drew Dixon to the space when he visited for the first time and saw it illuminated only by a single overhead light.

“I wanted it to feel like we snuck into the storage space of a forgotten museum,” he says.

One work by Dixon that leers out from the shadows is called The Clansman, a painting of swirling Klan hoods that friends as recently as a month ago told him was no longer relevant in American politics. 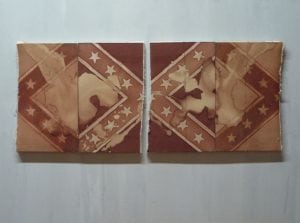 The other, called Twins, is a split Confederate flag, light and dark, rearranged so that the cross makes a diamond. The flipped X references a Congolese cosmogram, “a conduit to the spirit world,” said Dixon. “You’re born from that, and when you die you go back into that. The X is a negation, but if you draw a field of them, you also get a field of diamonds.”

The X also conjures crossroads, a space that in many cultures is vulnerable to liminal energy from the spirit world. (Think of Robert Johnson selling his soul to the devil there.) The relationship between X’s and diamonds changed as Congolese imagery became woven into the fabric of African-American culture, and that is explored in a piece called Hole Nation, by Nari Ward. Years ago, Ward discovered an X inside of a diamond drilled into the floor of the First African Baptist Church in Savannah, Georgia, and later learned they were breathing holes above a crawlspace used by slaves fleeing in the Underground Railroad. The cosmogram has since become an integral part of his work; In Hole Nation, the symbol is nailed into a U.S. history textbook. 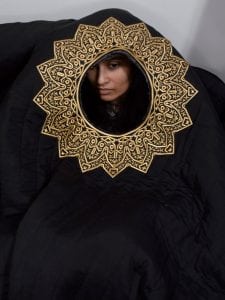 Baseera Kahn inside one of her Acoustic Sound Blankets, which is featured in the Beacon show (Photo by Thomas Barratt)

The series Refugees Leaving Venezuela RGB by Davide Cantoni are done in pearlescent paint that absorbs light, with the image revealing itself as the viewer moves through the space and the light that hits the canvas changes.

“Oddly enough, you can see the image better if you look at it through the camera on your phone, since it compresses it,” notes Dixon. One of Cantoni’s paintings is overlain by Farideh Sekhar’s ISIS/NASA, which also uses pearlescent paint to show images of rockets blasting into space alternating with mosques and monuments being destroyed; columns of flame that push humanity forward or backward. Detail of Toward by Luisa Rabbia (Photo provided)

The show ends on a hopeful note with Luisa Rabbia’s Toward. The blue lumps spread to the furthest reaches of the tallest wall suggest barnacles. But, upon closer inspection, they are blue porcelain heads, staring downward, modeled after photographs from Yann Arthus-Bertrand’s book, Six Billion Others.