The Philipstown Town Board informally agreed on Aug. 23 to accept a donation of nearly 11 acres of land, large enough for two athletic fields and a building, in Garrison.

The property, a gift from Scenic Hudson and the Open Space Institute, is located at 982 Route 9D opposite the Highlands Country Club and across Route 403 from the Desmond-Fish Library. The town government and donors are working out the legal terms for preserving the site as parkland.

In a workshop session at Town Hall, Councilors Robert Flaherty, Michael Leonard, and Nancy Montgomery joined Supervisor Richard Shea in support of accepting the tract, which appears to have been previously farmed and contains a stream. Councilor John Van Tassel was absent but had earlier consented, Shea said. 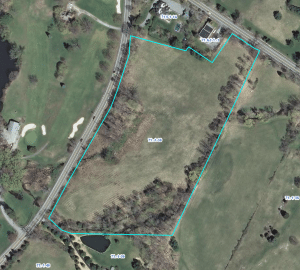 The boundaries of a 10.8-acre parcel that would be donated to the Town of Philipstown are shown in blue on a Putnam County tax map. The Desmond-Fish Library is located just north of the property, across Route 403.

The supervisor explained that the board will officially ratify its decision by passing a resolution in coming weeks and meanwhile will address related needs, such as getting the parcel surveyed. Based on estimates, there may be costs of several thousand dollars to the town to prepare for the transfer.

Claudio Marzollo, a member of the town Recreation Commission, said the site could accommodate a soccer field, a Little League field and parking, though because of the stream and other conditions, it cannot have a running track.

Leonard said the board hopes to plant native species along the stream and other board members suggested that part of the parcel might be used for a community garden or similar purpose.

The board conferred with Karen Ertl, who chairs the Philipstown Garden Club’s Conservation Committee, on the next steps, to become a Climate Smart Community, such as establishing a task force. So far, 27 residents have expressed interest in serving, Ertl said.

The board voted in June to participate in the Climate Smart Communities campaign, which is overseen by the New York State Department of Environmental Conservation and designed to reduce greenhouse gases and other forms of pollution that contribute to climate change.

Ertl, who has advised the board on Climate Smart matters, said the requirements to become certified can seem overwhelming but that the town can proceed incrementally. “The commitment needs to be there,” Ertl said. “But don’t feel pressured to do it [all] next week.”

Resident Pamela Doan, who is a contributor to The Current, urged substantive initiatives. “There has to be some action, because this is really, really, really urgent,” she told Ertl and the board. “The climate science is here.”

Another resident, Jason Angell, offered to begin preliminary work on one benchmark, an inventory of local greenhouse gas emissions.

Town Board members observed that becoming a Climate Smart Community dovetails with the updating of the 11-year-old Comprehensive Plan and that some recent actions, such as making town government buildings more energy efficient, mesh with the program’s goals.