In a past life, Gina Samardge was an accordion-playing mermaid.

She was a member of The Soon-To-Be-World-Famous Female Clown Troupe and the all-female Main Squeeze Orchestra, and the experience working in the circus and vaudeville showed her, she says, “how various art forms intersect.”

She has brought that lesson to Compass Arts, which she moved in January 2016 from its home inside the Howland Cultural Center to a space at Beacon Soundworks at 395 Main St., accessible through the Yankee Clipper parking lot. 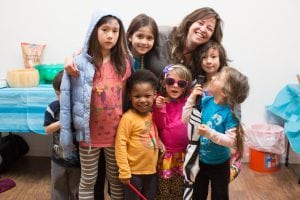 Compass Arts owner and director Gina Samardge poses with a group of students at the grand opening of the Compass Arts Enrichment Center last year. (Photo by Meredith Heuer)

Compass Arts offers a variety of unusual daytime and afterschool classes and workshops, including metal fabrication, cartooning, Afro-Modern dance fusion, Spanish language and culture for toddlers and a percussion-based orchestra.

Samardge, who teaches music at the Randolph School and Hudson Hills Academy, says the courses focus on giving students a skillset to explore their own creativity, including through final projects.

“It’s like giving children a prompt, from which they create,” she says. “For instance, our Afro-Fusion class teaches kids basic elements, then takes in their ideas in composing the dance.” 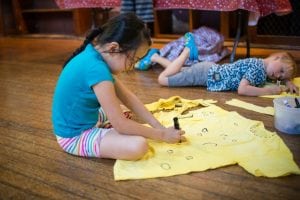 Imagination Playhouse students design their own costumes for their production of A Story, A Story. (Photo by Cappy Hotchkiss)

In Rompatom, an orchestra that uses drums, xylophones, recorders, ukuleles, clarinets and other instruments, students create their own 20-minute piece featuring World Music, pop and blues.

In another class, Imagination Playhouse, a fable, fairy tale or other story is altered by the children. For instance, barnyard animals become mermaids and tooth fairies. “We’re giving them an example, a story structure they can understand, and then encouraging them to explore character development, costumes, the works,” Samardge says. “We go beyond imitation and aim for interpretation.”

Compass Arts employs the Orff-Schulwerk Approach, which is common in public school music education. It combines music, movement, drama and speech into lessons that are similar to the world of play. 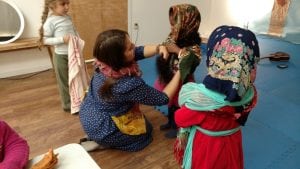 Garabatitos (Spanish exploration) teacher Lisa Marie Martinez assists students in dressing up while teaching them the Spanish vocabulary for their clothing. (Photo provided)

“I love the idea of having a space where so many different forms of creativity are going on that they can inspire each other and resonate,” Samardge explains. “The key is giving kids the tools early so they can express their creative voices. Nowadays, when there are so many restrictions on creativity in public schools, it’s so important that other resources reach children.”

Compass Arts also has launched classes for adults, including a women’s chorus and a family chocolate-making workshop. 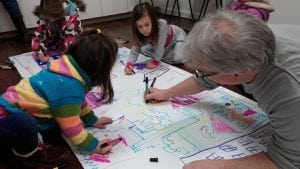 Samardge was introduced to Beacon after coming to the city on a weekend visit with her husband. Soon after moving from Brooklyn, she attended a Beacon Sloop Club sing-a-long, where she joined in with Pete Seeger. A music teacher who was leaving the Randolph School heard her voice and urged Samardge to apply to succeed her. At the same time, she had taught creative classes for children in Brooklyn and thought Beacon was ripe for the same approach. Her first venture here was a toddler movement class at Ballet Arts Studio.

To register for Compass Arts classes, most of which begin during the last two weeks of September, see compassarts.org or call 917-648-4454. Samardge will have an information table at the Cold Spring Farmers’ Market on Saturday, Sept. 9, and at the Beacon Farmers’ Market on Sunday, Sept. 10. Courses for children and teens typically range from $50 to $375.