For the first time in 20 years last season, the Beacon girls’ soccer team won the league title with an overall 11-6 record.

While replacing Gabby Lucas, who is now playing for Pace University, will be a challenge, eight other starters return for third-year head coach Hugo Alzate.

“Our goals are to repeat as league champions, host a sectional game and win a sectional game, which Beacon has not done for 29 years,” Alzate said. (Last year’s girls lost in the first round of the tournament in a game decided by penalty kicks.)

The Bulldogs will look to possess the ball, dictate the pace and as the season and team progresses, press opponents with aggressive defense. 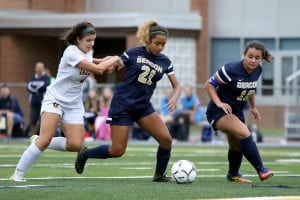 The team’s three seniors are co-captains: Reanna Cader, an honorable mention All-Section selection last season; defender Brianna DerBoghossian; and Chloe Antalek, an All-League selection who leads the Bulldogs in scoring with 34 career goals. (Scoring runs in the family; her mother, Stacey McKeon Antalek, a 1989 graduate, had 90 career goals for the Bulldogs.)

“What makes Antalek so good is that she can finish,” says Alzate. “She has a knack to get her foot or head on the ball.”

The juniors include forward Victoria Banks, who, Alzate says, takes some of the offensive pressure off Antalek; goalkeeper Meagan Meeuwisse (“the most important person on the team”), and midfielder Eliza Ericson (“the game goes through her”).

Sophomore Analiese Compagnone, he says, is a “smart and athletic” player who could be All-Section this year.

The boys’ soccer team, which finished 12-6 last season, also hopes to repeat as league champions and advance further into the state tournament after being upset in the first round last season.

It won’t be easy: the league has improved and the Bulldogs’ schedule includes some of the best teams in the region, including Pearl River, Lakeland, Ketcham and Arlington.

The Bulldogs will be looking for balance, said Coach Craig Seaman, leaning on a number of players who are comfortable playing a short passing game or taking players off the dribble.

Seaman noted that high school soccer has benefited from the growth of Major League Soccer, which has raised the sport’s profile. Today’s high school players have grown up watching professional soccer on television.

On the flip side, he said, the sport has a “pay-to-play” system that excludes a number of players who can’t afford to join club teams that provide a higher level of competition and coaching.