The Beacon police chief has recommended to the school board that it allow him to assign a police officer, known as a school resource officer (SRO), to the district.

In response, board members and administrators say they want more input from the public before making a decision. 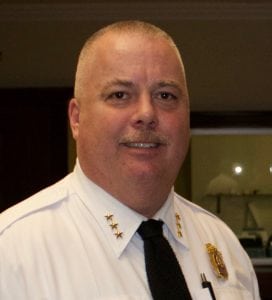 Chief Doug Solomon, accompanied by an SRO from Poughkeepsie, spoke at the board’s Aug. 28 meeting, with Solomon commenting that school safety is “one of the things that keeps me up at night.”

In an interview this week, Solomon said his proposal wasn’t made because of disciplinary problems at any of the Beacon district’s six schools.

“This is in response to issues that are more global than that,” he said. “The district is not where it needs to be regarding safety plans.”

Beacon Superintendent Matt Landahl, in his first year with the district, said he has worked with school resource officers in the past and recalled “countless” times he conferred with the officers on safety and security.

He, too, stressed that the officer would not be brought in to “to fix some problem” at Beacon High School or anyplace else. But in his experience, “it always went better and was less complicated” when an officer familiar with the schools was called to diffuse a volatile situation.

In Beacon, the officer that Solomon said he would assign is a 10-year veteran of the department and has completed state training required of school resource officers. He would float between the five schools within city limits. (A sixth school, Glenham Elementary, is located in Fishkill.)

When the Beacon school board discussed the idea again at its Sept. 11 meeting, members were split. President Anthony White said it would improve safety, but Antony Tseng, echoing comments by a number of parents, said the board should consider the implications carefully before stationing a police officer in the schools.

In Cold Spring, the Haldane campus has had a Putnam County sheriff’s deputy as a school resource officer since the fall of 2015. Prior to the county Legislature approving the hire, the debate centered mostly on the expense of adding the position. For the 2016-17 school year the officer cost the district about $77,000.

City Administrator Anthony Ruggiero said Beacon would pay half the cost of the school resource officer if the board approves the assignment.