Parking will soon be banned along Route 9D just north of Cold Spring, a move that should help alleviate hazardous conditions created by vehicles that park there during the peak hiking seasons. Mayor Dave Merandy reported at the Sept. 12 meeting of the Village Board that he and Philipstown Town Supervisor Richard Shea met with representatives of the state departments of transportation and parks, the state park police and Scenic Hudson and Hudson Highlands Land Trust to discuss the congestion.

The Department of Transportation agreed to install no-parking signs along the east side of Route 9D north from the newly completed Washburn Trail parking lot. Parking will also be prohibited along the west side of Route 9D from the Little Stony Point Park office to Fair Street in Cold Spring. 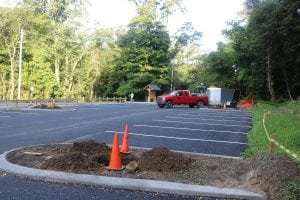 Except for landscaping, the state has completed upgrades to the 47-space Washburn parking lot, across from Little Stony Point Park. (Photo by M. Turton)

Merandy said Shea will contact the Putnam County Sheriff’s Office regarding enforcement because the park police have only eight officers who cover both Westchester and Putnam counties. He also noted that Cold Spring police officers can’t issue parking tickets beyond the village boundary, which is just south of Little Stony Point Park.

Transportation officials said the signs should be installed within three weeks, although Merandy commented, “I wouldn’t hold my breath.”

Merandy said plans for the proposed Hudson River Fjord Trail call for measures along 9D to slow traffic, including a possible reduction in the speed limit. The limit from just south of Beacon to Cold Spring is 55 mph, although it drops from the village to Bear Mountain Bridge to 40 mph.

Art below the tracks

On Nov. 4, Michelangelo Pistoletto, one of Italy’s most prominent Arte Povera artists, will transform the lower Main Street area of Cold Spring into a venue for his performance art. The event will celebrate the opening this past June of the Italian art space Magazzino on Route 9 in Philipstown. 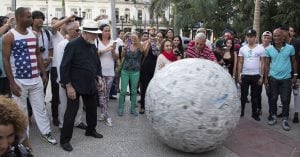 The November event will harken back to Pistoletto’s 1967 performance piece Sfera di giornali, in which he pushed a sphere fashioned from newspapers through the streets of Turin. In Cold Spring, he will create a 1-meter sphere from pages of The Current, The New York Times and The Putnam County News & Recorder that will be rolled across Market Street from Lunn Terrace to Main and the bandstand.

Magazzino’s Lithgow Osborne explained that the performance will underline the facility’s connection and commitment to Cold Spring and Philipstown while seeking to “create an engagement with the viewer and the artist by observing and moving the sphere as it passes by.”