U14 Arsenal Prevail Over East Fishkill

Arsenal started the scoring only four minutes into the game when Philipstown’s Tim Ben Adi took a free kick outside the penalty box and Daniel Carlos headed the ball into the net with a backward flick to take the early 1-0 lead. Two minutes later, Colin August sent a well-timed pass to teammate Evan Maasik who dribbled past several defenders and placed a shot to the left of the Force keeper, increasing the Philipstown lead to 2-0.

East Fishkill was able to put a goal on the scoreboard at the 13-minute mark, but the Gunners kept the pressure on when Maasik dribbled to the end line and passed back Carlos who was well-positioned at the top of the goal box to blast in his second goal of the game. Philipstown finished their first half scoring onslaught when Ben Adi won the ball and dribbled to the Force end line, launching an impossibly angled shot that soared over the East Fishkill keeper’s head into the left side of the net.

Ten minutes into the second half, Mayer sent a cross to Danny Urbanak who headed the ball in, bringing Philipstown’s lead to 5-1. Arsenal was able to maintain this lead for most of the second half. In the waning minutes of the game, East Fishkill put two additional goals on the board but at the final whistle, Philipstown held on to the win with a final score of 5-3. Arsenal will match up against West Point on Sept. 17. 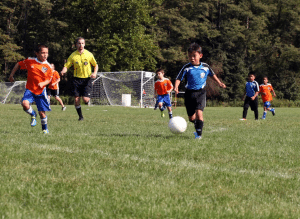 Kioshi Tomizawa of the Vikings rushes for the goal. (Photo by Sheila Williams)

The U9 Philipstown Vikings, coached by Ralph Moran, opened the season with a 2-0 win against the Poughkeepsie Flames. They kept the Flames from scoring, with a true, Viking-like defense, and terrific goal tending by Patrick Shields.

The first goal scored by Darwin Saquipay, after a foul outside the penalty box. The second by Jack Fitzgerald with a stellar assist by Kioshi Tomizawa.

On a brisk and sunny beautiful day Team Storm U9 boys took the field against the Yorktown Fury. As demonstrated last season, they continued their reputation as a gritty, tough, lively and passionate group. At times, they displayed moments of defensive brilliance and courage blocking and extinguishing the Fury from scoring further.

Stand out defensive work came from Griffin Lucca, Gavin Mahoney, Theo Saks, Henry Hedlund, Alex Gaugler, Jack Ferreira and Lincoln Wayland. On the offensive half of the field, great hustle, nifty moves and skillful drives were seen from veterans Lenny Wolfe and Oliver Sanders. Newcomers Christopher Kordaris and Marco DiLello showed real promise. In the end team Fury overpowered the Storm by pelting shots from all angles. The boy of the hour and the game ball went to goalkeeper Connor Keegan for his countless stops and courageous displays to block most shots.

Phoenix Arise From the Ashes

With only one full-time player returning from last season, the Girls U-11 Phoenix are truly living up to their name. On a lovely late summer afternoon, the regenerated Phoenix kicked off their debut campaign against the Hyde Park Cyclones at Philipstown Field.

The first half saw some tightly organized play out of the back – numerous runs by the Cyclones were diverted and pushed out by the defensive line of Laurel Sassano, Dylan Ambrose, and Josie Foley-Hedlund. Midfielders Amelia Alayon, Lyla Chandler, Zohra Kapoor, and Ada Caccamise – amazingly, all playing their in their first soccer game and ably assisted by Kira Drury, a recent acquisition from a famed Astoria, Queens team – helped connect with the front line and kept the ball moving to Morgan Murphy, playing as striker.

The two stars of the game – both playing for the first time, and almost sharing a name – were Sophie Tomlins and Sofia Rasic. Sophie dove right in – literally – as goalkeeper, a somewhat thankless position not for the faint of heart. Her efforts and fearlessness during the first half kept the game close in an impressive display from a first-time player. Sofia, on the other hand, kept to her feet, and used them in playing as a remarkably insightful and well-positioned left midfielder. She had several nice runs with her partners and did a great job penetrating the Cyclones defense.

While the Cyclones were able to come out on top, we were all impressed with the cohesiveness, grit and enthusiasm of this new team, and given this first game, are looking forward to a great season.

Kicking off on their own home turf, the Boys U12 Philipstown Strikers knew they faced an uphill battle in an entirely new division, as they came off an impressive undefeated 2016 season. Coaches Danielle Pack McCarthy and Kristina DiGiglio helped set the tone early on, keeping players’ expectations in check and staying focused on learning from their strong opponents. Frankie DiGliglio started in goalie position and deflected several attempts on goal from the LaGrange Gunners.

Midway through the first half, the Strikers were down 2-0, as their opponents utilized strong footwork and speed to move the ball across the field. Coach McCarthy worked to rotate offensive players into defensive positions to gauge players’ strengths throughout the game. Going into the second half, Colin Delabie took over the goalie position and caught several balls attempting to work their way into the net.

The team experienced some fantastic breakaways from the likes of Jake Powers and Vlad Saban, but their opponents’ defense came back strong and blocked the Strikers’ attempts to move the ball into the goal. Towards the end of the game, Frankie DiGiglio took advantage of a penalty shot and booted the ball beautifully into LaGrange’s net, bringing the score to 6-1, LaGrange.

Still, the Strikers came away from the game with high spirits despite the loss, and they look forward to taking on Carmel Xtreme on Sept. 17 in their first away game of the season.