With summer winding down, a weekend excursion that doesn’t demand a marathon, high-speed drive on a congested interstate has great appeal. Put Hudson, New York — less than 70 miles north on the Taconic Parkway — on your day trip short list.

Many reasons to visit

Founded by New England whalers who valued it as a port, Hudson was incorporated in 1785. Today it has 6,500 residents, 300 historic buildings, a waterfront, 51 antique shops, 10 miles of historic streets, a lighthouse, 10 performance spaces and 18 galleries. 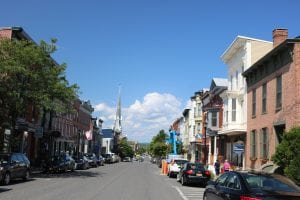 The Columbia County Chamber of Commerce office at 1 Front St. offers a diminutive booklet with block-by-block details of everything to be found along Warren Street, the colorful and architecturally pleasing main drag.

You can park your car and leave it for a good part of the day, as Hudson by foot — or boat — is a good way to go. At Henry Hudson Riverfront Park through October, the 49-seat Spirit on Hudson and the 14-seat Little Spirit provide daily tours that last from 45 minutes to four hours. Fall foliage outings are 90 minutes. 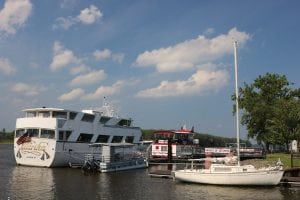 First park of its kind

Promenade Hill, overlooking the Hudson River near Front and Warren streets, was perhaps the first park in the U.S. established to protect a scenic vista. It’s also known for its 12-foot, 1896 bronze statue of St. Winifred by sculptor George Bissel.

With more than two dozen restaurants and pubs with such intriguing names as Mexican Radio, Wunderbar & Bistro, Crimson Sparrow and American Glory BBQ, there is no reason to go hungry or thirsty. 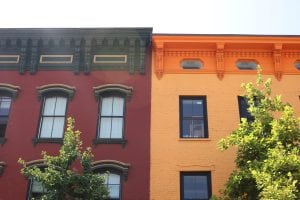 Bookstores should have a lot of — well — books, and the Spotted Dog and Ale’s 10,000 possibilities won’t disappoint. It’s also a pub that features craft ales and a selection of wines. Could make for pleasant reading. In addition, as the city has boomed, it developed a reputation for live music and theater at venues such as Club Helsinki, Hudson Opera House and Stage Works. 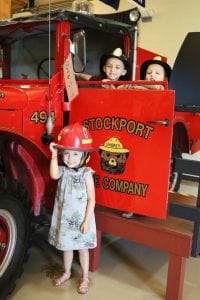 Children at the Firefighting Museum (Photo by M. Turton)

Don’t miss the Museum of Firefighting operated by the Firemen’s Association of the State of New York at 117 Harry Howard Ave. With 50,000 square feet of exhibit space, it houses one of the premier collections of firefighting equipment, from the 1731 Newsham Pumper to the 1939 American LaFrance Scout, whose art deco design earned it the nickname “the ugly American.” Exhibits include kid-friendly photo ops from manning the fire hoses to getting behind the wheel of the Bush Buggy.

Out in the country

After you’ve walked Hudson, take your car into the countryside. There are a slew of orchards and farm stands nearby. One of the most convenient is Taconic Orchards on Route 82, operated by the Feller family for more than 100 years. Compared to 2016’s meager harvest, “there’s a real bumper crop of fruits and vegetables this year,” Arnold Feller said. “There an awful lot of apples, pears and Concord grapes,” not to mention tomatoes and sweet corn. 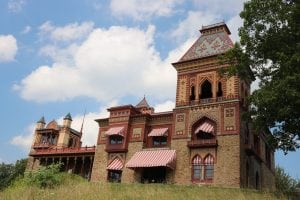 Olana, the 19th-century home and studio of Hudson River School painter Frederic Church (1826-1900), lies just south of Hudson and deserves a day trip of its own. A national landmark, the site is managed by the state parks department.

Church was a global explorer and his home’s combination of Victorian architecture and Middle-Eastern decorative motifs reflects his travels. The interior remains much as it looked in the 1890s and includes paintings, sculptures and antiques from around the world. One exhibit, Overlook, has an installation by Teresita Fernández.

If you don’t take a cruise, get out the telephoto lens and snap the picturesque Hudson-Athens Lighthouse, also south of the city. Built in 1874 and automated in 1950, it is owned by a nonprofit and still guides ships and boats through the Middle Grand Flats. The next tour is Oct 9. Call 518-822-1014.

One thought on “Day Trip: Hudson”