The Hudson Valley Renegades, the minor league baseball club that plays at Dutchess County Stadium, won the New York-Penn League Championship on Sept. 14 by sweeping the Vermont Lake Monsters in a best-of-three series. 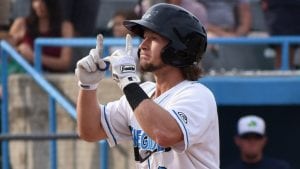 In the Renegades first playoff game, against the Staten Island Yankees on Sept. 9, Zacrey Law hit a solo homer to win it in the 13th inning. (Photo by Nick Musial/HVR)