We know there’s a problem. What can be done about it?

That’s the question The Current hoped to answer for the Highlands. Last year, drug overdoses – the most visible marker of the epidemic – killed 64,000 Americans, a 22 percent increase over the year before. About 15,400 of those deaths involved heroin, 20,000 involved fentanyl (a synthetic that is 50 to 100 times more powerful than morphine) and 14,400 involved prescription painkillers, according to preliminary federal data.

On July 31 a commission assembled by President Donald Trump to address the crisis made an urgent recommendation that he declare a national emergency, noting that the overdose death rate in the U.S. has reached the equivalent of 142 people per day.

The problem is not far away. Dutchess and Putnam counties together have an overdose death, on average, about every four days. Statewide, about seven people die each day. From 2013 to 2015, Dutchess had the second highest rate of overdose deaths per capita in the state (trailing nearby Sullivan County); Putnam was in the middle of the pack, but the rates in both counties were higher than those of New York City or the state.

On Aug. 18, Forrest Ryzy-Ryski, a 2011 graduate of Haldane High School in Cold Spring and a talented artist, writer and martial arts fighter, became the latest casualty when he died of a heroin overdose in Georgia, where he was attending Kennesaw State University. He was 23.

A memorial service was held in Garrison on Sept. 10. The day after his death, on Facebook, his grandmother posted an anguished plea: “I wish I could go with him and take care of him, tell him that I love him and try to understand the big why.” In frustration, she warned others who, perhaps, think they do not need help: “There is no answer, you also will die, it is a matter of time. Your grandmother will shed tears to no end, too.”

We saw some of that pain on Aug. 31 at the Cold Spring bandstand, when those struggling with addiction and their families and supporters came together to observe International Overdose Awareness Day and call for more resources to fight the expanding shadows. We saw it in graffiti near the Metro-North station: “Cold Spring Kills Kids & Breaks Hearts.”

Overdoses have become the leading cause of death for Americans under 50, outpacing assault and suicide. They kill more Americans each year than die in auto crashes or gun violence. They are killing people faster than H.I.V. ever did. And the addition of fentanyl to the mix with heroin has made the epidemic even deadlier. 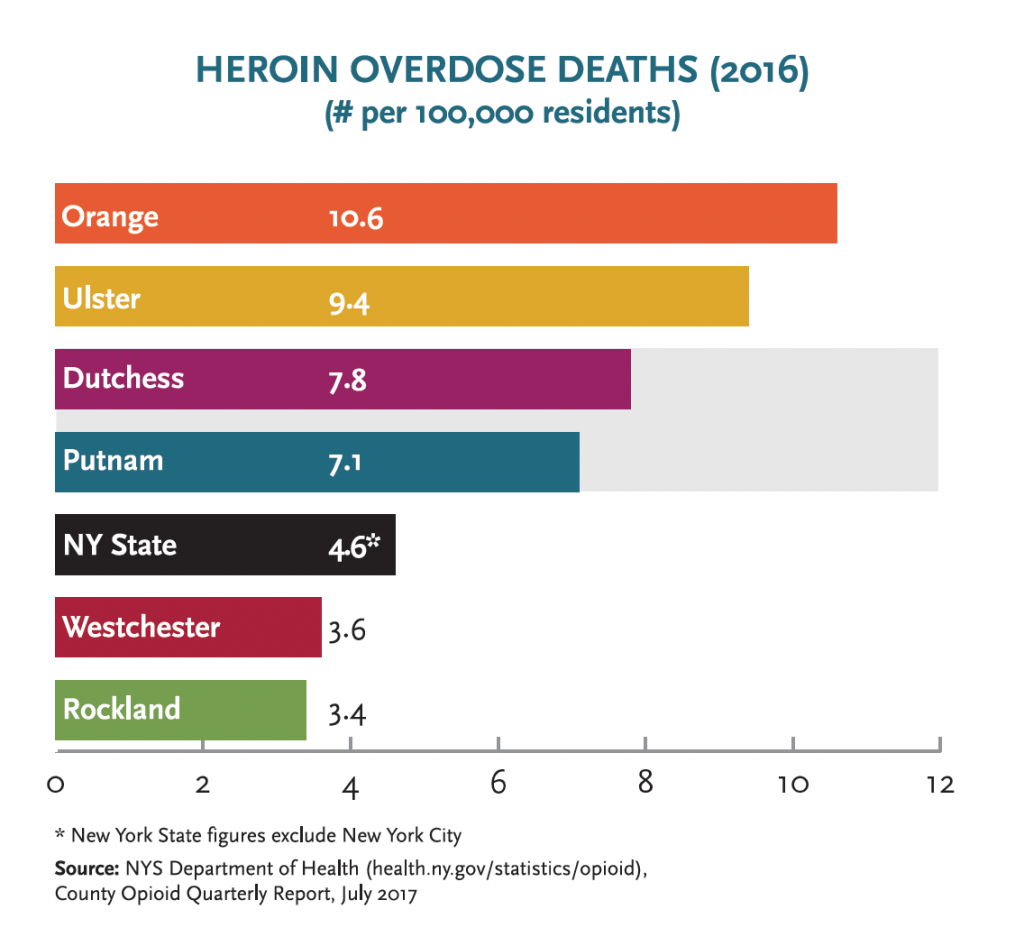 When fentanyl showed up in the Hudson Valley in late 2013, there were 68 heroin overdoses in Poughkeepsie in less than two months. Fentanyl is widely used in medicine; much of what is found on the street is manufactured in illicit labs in China and Mexico. Why wait for a poppy to grow? A lethal dose is about 2 milligrams, which looks like a few grains of salt. It is so potent that police officers can be sickened during drug busts. And dealers are now importing the even more deadly carfentanil, an elephant tranquilizer that is 10,000 times more powerful than morphine, to mix with heroin. Chinese suppliers sell 2 pounds of the drug – enough for 50 million doses – for about $2,750. 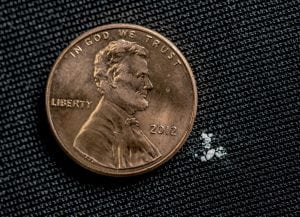 A lethal dose of the synthetic opioid fentanyl (DEA)

According to a federal report released last month, nearly 600,000 teenagers and adults in the U.S. are addicted to heroin, and more than 2 million to prescription painkillers. Doctors in Putnam County write 50,000 prescriptions annually for opioids; in Dutchess, it’s 165,000, both at per-capita rates higher than New York City or the state at large. Most states, including New York, have cracked down on doctors who overprescribe, but that forces many addicts to turn to street drugs, whose potency is harder to measure.

To find out more about the fight against opioid addiction in the Highlands, The Current created an enterprise journalism fund with initial contributions from members of our board of directors. Their support allowed our writers, photographers and designers — Chip Rowe, Scott Veale, Michael Turton, Liz Schevtchuk Armstrong, Jeff Simms, Anita Peltonen, Kate Vikstrom, Lynn Carano, Ross Corsair and Brian PJ Cronin — to spend more time on this project than they would for a typical news story. We hope to address other national issues of local importance in the near future. 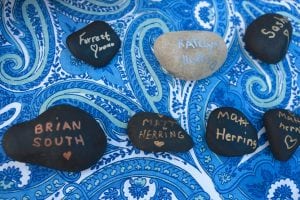 Participants at an Aug. 31 vigil at the bandstand in Cold Spring added names to painted rocks that were placed around the bandstand among the flowers. (Photo by Ross Corsair)

This series has four parts.

In Part 1, reporters Michael Turton and Liz Schevtchuk Armstrong spoke with the parents of young men who struggled with opioid addiction. One died, one survived, but they faced many of the same obstacles in getting treatment. We asked them to share their experiences, hoping it would provide a road map.

In Part 2, we examined the role of law enforcement and the courts in battling the epidemic. Turton looked at the work of the Putnam County Drug Court, while Jeff Simms spent time with Beacon and Dutchess County police officers who are at the front lines.

Intro // A Day in Drug Court // “We Can’t Get Our Regular Work Done” // Burlington Chief on Opioids, Crime

Finally, in Part 4, we shared the thoughts of specialists, counselors, doctors and those struggling with addiction about what they feel should take priority in addressing the problem.

We appreciate your feedback about the series and thoughts about how best to address the epidemic. Email [email protected] or post a comment below.

3 thoughts on “Fighting Back: The Opioid Crisis”