If you haven’t been inside Mandeville House, now’s the time. The foundation that owns the historic home in Garrison, which was built between 1735 and 1737, opens it to the public only a few times each year, and its fall hours are 1 to 4 p.m. on Sept. 30 and Oct 1 and again on Oct. 7 and 8. There is no charge.

The home, at the northwest corner of Route 9D and Lower Station Road, served as headquarters during the Revolutionary War for Gen. Israel Putnam and other Fort Arnold (West Point) commanders. Its acreage was part of the 1697 land grant to Adolphe Philipse by King William III.

It is believed that Jacob Mandeville, a New Yorker of Dutch descent who was born in 1709, built the home. Following his marriage in 1735 to Sarah Davenport of Philipstown, he leased 400 acres in the Philipse Patent for £5 a year and constructed the original house on a hill that provided a clear view across the Hudson. George Washington probably did sleep there; his expense account contains an entry dated July 26, 1779, that reads “To cash paid at Mandevile for house, rooms, etc.” 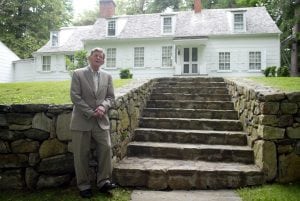 A Revolutionary-era road leads to the house, the exterior of which has undergone several transformations. It retains its gabled, shingled roof, replete with two chimneys. Underneath, placed among its eight bays, are dormer windows. The entrance is decorative, with a stoop and fluted pilasters surrounding the door. Across Lower Station Road, on what is now the Highlands Country Club, was a grist mill and dam.

Before the war, the 4.75 acres was part of a larger parcel owned by Beverley Robinson that he acquired through his marriage to Susanna Philipse, who inherited a third of the Philipse lands. A Loyalist, Robinson later was a principal player in the Benedict Arnold/John André affair. Some believe André was kept at Mandeville House, and not at West Point, after his capture near Tarrytown.

After the British lost the war, Robinson’s land was seized by New York authorities and, in 1785, auctioned off. The winning bidder was Joshua Nelson, who happened to be Mandeville’s son-in-law.

In 1852 the Mandeville home and land was sold to architect Richard Upjohn, who had retired from his New York City practice and moved to the more bucolic Highlands. Upjohn did what architects tend to do — he renovated, adding wings and a library, partitioning the attic into rooms, and altering the façade from its Colonial style to the then-popular Gothic Revival with peaks on the dormers and scroll work on the eaves.

Along with several Garrison homes, Upjohn designed nearby St. Philip’s Church. Prior to its construction, worshippers met at Mandeville house. Upjohn lived in the house until his death in 1878. 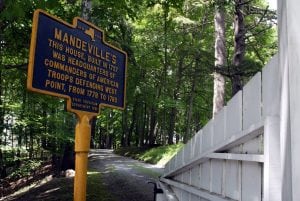 In the 1920s, Col. Julian Benjamin, who had purchased the property from Upjohn’s descendants, worked with Nancy Allan to restore the exterior to an approximation of a Dutch-English farmhouse, as it appears today. The house has a fine collection of Hudson Valley and original 18th century furniture. The interior of the house has low beam ceilings and paneling.

Nancy Allan eventually became an owner of the property and left it to her daughter, Margaret Allan Gething. When Gething died in 1975, she left the home, and another she owned in San Antonio, to a trust to maintain as historic sites. The home is now owned and maintained by the Perry-Gething Foundation, which is overseen by Robert Perry, a Texas lawyer and friend of the family.

The fact that the home is open infrequently has led critics to charge that Gething’s wishes that it be a historic site are not being honored.

(According to the Philipstown tax rolls, the property has an assessed full-market value of just under $1 million. The foundation’s most recent IRS filing says the nonprofit paid $32,867 in property taxes in 2015, on both the New York and Texas homes.) 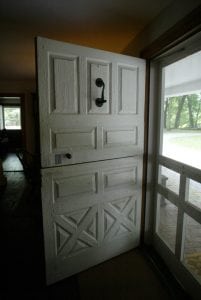 The front door of the Mandeville House will be open to visitors. (Photo by Susan Stava)

The kerfuffle came to a head in 2006, when an article in The New York Times detailed a series of charges and countercharges between Perry and Robert Bickford of Philipstown over public access to the site.

In an email, foundation board member Katherine Perry said the Times article was “apparently the result of misinformation and misunderstanding. The house has been open every spring (June) and fall (October) for tours and cultural events for New York state and local communities.” She added, “There have been no further developments as the ‘controversy’ was groundless and without merit.”

Bickford, an attorney, had at the time of the Times article filed two complaints with the New York State attorney general. He didn’t pursue the matter, he wrote in an email, but still believes Perry has not honored the wishes of his client, which was to give the home to the community. He added, however, that “through the foundation he created, he has maintained it beautifully.”

Bickford said his concern now is what will happen to the property. The foundation has only three trustees, “all of whom are aging, and none of whom is part of the Garrison community (except that Mr. Perry shows up from time to time).”