Two years later, what has been accomplished?

When state and local officials recently discussed Breakneck Ridge, the congestion and other problems raised 21 months ago came up (again). But so did examples of progress.

Many participants in the session had met in December 2015 at the Cold Spring firehouse in a similar roundtable. Unlike the 2015 event, however, this latest gathering did not include anyone from Beacon.

State, county and local officials met on Sept. 19 at the Philipstown Town Hall to discuss congestion at Breakneck Ridge. (Photo by L.S. Armstrong)

Barbara Scuccimarra, who represents Philipstown in the Putnam County Legislature, and who organized the meeting, noted that the mountain had attracted an estimated 100,000 visitors since March. “It’s getting to the point that it’s a dangerous situation,” she said.

Chief Steve Smith of the Cold Spring Fire Company said his department had answered 17 rescue calls since February. Ralph Falloon, a former CSFC chief who serves with the Putnam County Bureau of Emergency Services, noted that in 2016 it handled 14 calls. 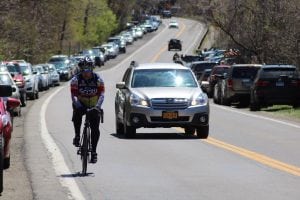 Traffic along Route 9D this past summer (Photo by Michael Turton)

According to Cooper, most distress calls are handled by park personnel and stewards from the New York/New Jersey Trail Conference and other outdoor groups. “There are a lot of people addressing this,” she said, and local ambulance corps generally only answer calls involving serious injuries.

At the 2015 meeting, local officials had asked that the state park service take on a greater role in rescues. Yet, “here we are, two years later,” said Philipstown Councilor Nancy Montgomery. “We need some help. Where is the support from the county and the state?”

Ken Clair, acting commissioner of emergency services for Putnam County, suggested a rope team created by the county (an idea discussed at the 2015 meeting) could expand into a search-and-rescue squad for Putnam and Westchester counties.

Philipstown Councilor John Van Tassel wondered about pooling resources with Bear Mountain State Park, which is just across the Hudson River but in a different state park region. “This area is now becoming more popular than Bear Mountain,” he said. “Maybe some of the funds from Bear Mountain need to be reassigned over here.”

Capt. Michael Cappuccilli of the state park police said Bear Mountain rangers assist with rescues on the east side but are busy on the west, too. He said its officers cover four counties, with two officers on duty at a time and seven officers in total — though it should have 12. Park use has increased substantially since 2000, but he has fewer officers than he did then, he said.

“New York State needs to fund these parks,” Shea argued. “We can talk these things to death, but the answer is obvious. We need more funding.”

Sandy Galef, who represents Philipstown in the state Assembly, proposed that local officials and park staff determine the “ideal” amount of money required and, to maximize clout in Albany, bundle that figure into a common request with appeals from communities and parks in similar circumstances. State Sen. Sue Serino advised a related, regional approach.

There was talk of progress. Linda Cooper and others observed that, since the 2015 meeting: