Judge James Reitz presides over the Putnam County Judicial Diversion / DWI Treatment Court in Carmel, more commonly known as Putnam County Drug Treatment Court. It is one more than 3,000 such courts across the country that give offenders a chance to avoid prison time if they agree to receive treatment. Reitz’s responses have been edited for brevity.

How effective is treatment court?

Spend two or more years in the program and there’s an 87 percent chance you’ll be successful after graduation. During the first 10 to 12 years we’ve had a 13 percent recidivism rate. In October we’ll have six or seven graduates who’ll have their charges dismissed or reduced. They’ll move on. We do save people’s lives.

Yes. Each agreement is tailored to the individual’s situation: background, age, criminal charges, drugs involved, etc. But there are common elements regarding cooperation and accountability. 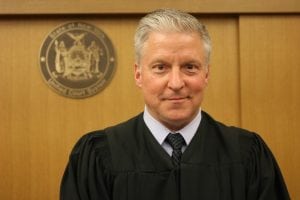 It seems odd that someone has to be arrested to get into the program.

You do have to commit a crime to get into this program. It has to be non-violent, for the most part – no sexual assault or domestic violence. You also have to be evaluated and deemed in need of treatment for alcohol or drug dependency.

How significant a factor is mental health?

At one time, we had a treatment court for mental health. It was a big mistake to stop it. It’s rare you find someone arrested on a serious charge who doesn’t have a dual diagnosis — either primary substance abuse and secondary mental health or vice versa.

How many violations are allowed before someone is expelled?

There’s no cookie cutter. Someone may have six or seven violations and stay in the program while someone else may have only three or four and go to prison.

You award coins to defendants as they reach milestones. Why is that important?

They’re symbols of accomplishment. Any time participants are being challenged, taken off their game, the coin reminds them that they’ve made good decisions before, whether it’s 30 days or a year clean and sober. They realize that if they did it then they can do it again now.

How many of those in became addicted initially to prescribed painkillers?
Eighty-five to 90 percent. There are exceptions, but the majority moved from prescription meds because of the high cost or because the doctor stopped writing it. They then go to the cheapest form: heroin.

What do you say to people who feel prison isn’t the best way to treat drug offenders?
It’s easy for those unaffected by any of this to say that. And in a sense they’re right. But that’s why we have treatment court. We give them every opportunity to be successful and to not go to jail. But if they keep committing crimes and doing drugs, why should they be allowed to kill someone because they’re high behind the wheel, or to burglarize a home to pay for their habit and stab or shoot somebody when confronted?

What is the toughest challenge defendants face?
Staying alive, to give us time to hold them accountable. It’s a minimum two-year program and I won’t take “no” for an answer. If they don’t do things that force them out of the program, we have a fighting chance to change their life.

They think they have it tough because they have to go to court or a treatment program. Is that tough, a second chance to stay out of prison? I tell them to think about those who lost everything, even their lives, in the hurricanes. They had it tough.