In response to a number of NFL players kneeling during the national anthem before games on Sept. 24 in what they said was a protest against police brutality and racial injustice, Putnam County Executive MaryEllen Odell has ordered the county’s Row of Honor installed along Lake Gleneida in Carmel. She will lead the anthem in a ceremony on Sunday, Oct. 1, at 10 a.m., at Cornerstone Park, 1 Fair St., in Carmel. 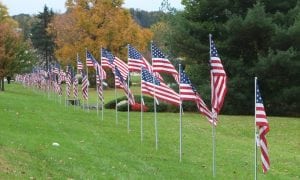 The Row of Honor (Photo provided)

“This isn’t about race, this is about respect,” said Odell in a statement. “This is about honoring and standing in unity with all those who have sacrificed themselves to protect the safety of others.” She also said that “standing during the National Anthem is not about anything political.”

A logo created for the event

In a statement, Odell cited Alejandro Villanueva, a West Point graduate who is a tackle for the Pittsburgh Steelers. He appeared alone before the team’s Sept. 24 game for the anthem while the rest of the team remained in the tunnel. Villanueva, a former Army Ranger who served three tours in Afghanistan, later said he meant to remain with his teammates but in sight of the flag. The team decided to remain in the tunnel because it was divided on whether to kneel or stand.

Villanueva said he would always stand for the anthem, but of his teammates who wanted to kneel, added: “I take no offense. I don’t think veterans at the end of the day take any offense. They actually signed up and fought so that somebody could take a knee and protest peacefully whatever it is that their hearts desire.”

Karl Rohde, director of the county’s Veteran Service Agency, took a different view, saying in a statement that kneeling during the anthem as “vile” as burning an American flag, saying that the U.S. Supreme Court “got it wrong” when it ruled that act was protected by the First Amendment.