Ask a few locals to name the most important arrival to Beacon in the past 20 years and you’ll hear a handful of well-worn answers: Hudson Beach Glass, BeaconArts, Dia:Beacon, The Roundhouse.

Dar Williams, the singer-songwriter from Cold Spring, has a different response: the dog park.

“There was still the sense [in 2013, when the Beacon Dog Park opened] that something was about to happen in Beacon that hadn’t happened yet,” she said on Sept. 19. With the introduction of the park, “people had to talk to people that they didn’t really know. When your dog sniffs another dog, conversations start.” 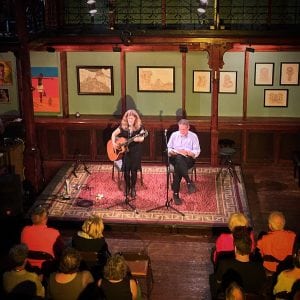 Dar Williams performing her song Storm King at the Howland Cultural Center during a presentation with Jonathan Rose (Photo by B. Cronin)

Williams, who has been visiting small towns for 20 years while on tour, has collected her observations into a book, What I Found in A Thousand Towns: A Traveling Musician’s Guide to Rebuilding America’s Communities. She spoke at an event at the Howland Cultural Center with urban theorist Jonathan Rose.

While Williams admitted her comment about the dog park was somewhat tongue-in-cheek, it sparked the idea for the book. “The more I thought about the cities that were coming together,” she said, “the more I saw that they all had spaces like the dog run that allowed certain kinds of conversations to take place.”

Rose said spaces such as parks, cafés and churches allow for “the strong bond of weak ties” as networks are formed, degrees of separation shrink and people find that it’s easier to find jobs, help for projects or roommates. Beacon has an abundance of all three.

Even Beacon’s architecture is credited with its revival; Williams pointed to Bank Square Coffeehouse, which has two rooms and a generous patio. “I recommend two-room cafes,” she said. “Because the second room is where poetry readings happen, insurrections are planned, and the depressed teenager can go to write in her journal and get hooked on caffeine instead of heroin.”

Both Rose and Williams said they are optimistic that its revived spirit will help Beacon face the challenges that success has brought, such as development and gentrification, which Williams defined as “when the shop gets replaced by the shoppe.” Although developers may not always have Beacon’s best interests at heart, she said, they have to work within the social structure the city has created and answer to its planning boards and citizens’ groups. Rose referred to that spirit as “collective efficacy.”

“There are various talking heads who say that all grappling is bad, that all uncomfortable interactions mean incompetence and idiots,” she said. “That’s not true. It’s grappling. I hope other cities can learn from these important conversations Beacon is having, because things are moving so fast here.”