After years of searching for an escape from its 225 square feet at the Howland Cultural Center, the Beacon Historical Society last fall found a new home at the 2,000-square-foot former rectory of St. Andrew’s Episcopal Church on South Avenue, south of the Bank Square Coffeehouse.

Members of the society, which was founded in 1976, spent the summer moving its collection of artifacts, maps, books, photos and newspapers dating to Beacon’s founding in 1709 as Matteawan and Fishkill Landing. 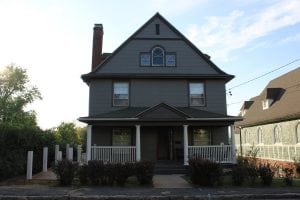 The new home of the Beacon Historical Society (Photo by A. Rooney)

The nonprofit’s board members have been hard at work setting up the space, which was largely funded through an anonymous donor, determining which rooms will hold what collections and supervising renovations, which include a ramp and ground-floor bathroom.

Earlier this week, Board Member Diane Lapis and Vice President Theresa Kraft paused while unpacking to give The Current a tour. They hope to be ready for a soft opening on Second Saturday, Oct. 14.

On Nov. 9, the society will debut Beacons of History, an awards program to recognize residents and businesses for their dedication to preserving history in the city.

The first honorees are Clara Lou Gould, who was mayor from 1990 to 2007, and the owners of Hudson Beach Glass, who in 2003 turned the former Lewis Tompkins Hose Co. firehouse into a gallery and glass-blowing studio.

Tickets for the party, at the Roundhouse, are $75. Email [email protected]

The home was built in 1903 for $5,000 as a rectory for St. Andrew’s next door, with funds borrowed from John Rider, president of the local New York Rubber Co. Its ground floor has three rooms, a kitchen and bath. The large rear gallery contains models of the ferries that once were an integral part of Beacon’s riverine transportation system.

A ferry bench invites visitors to study one of the latest acquisitions, a four-foot-long dollhouse made in Beacon around 1928 by Toy Krofters, a company once located at 380 Main St. The toy belonged to the mother of Shelley Northrop, of Sandy Hook, Connecticut, who donated it, and was available at FAO Schwartz for $300, furniture included. 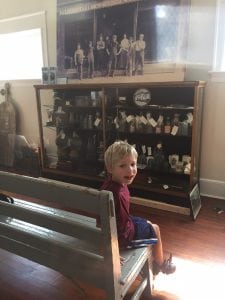 Graham Wood takes a break on a ferry bench at the museum. (Photo by Robyn Wood)

The first-floor map room contains one of current interest for the Craig House property, while a gift shop is tucked into a large closet.

Upstairs, a room is filled with shelving donated by Neil Vaughn of Hudson Valley Auctioneers, who also helped move the collection, for storing archival boxes. The goal is for the upstairs to be filled with material from the collections that was inaccessible at the Howland Center, such as issues of the Beacon News dating from 1924 to 1940 and records from Highland Hospital. 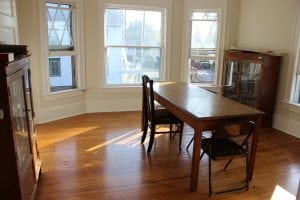 The library on the second floor is a work in progress but does have a table for researchers to spread out their finds. (Photo by A. Rooney)

The society’s library is dominated by four windows. It remains a work in progress but researchers will have a place to request materials and a table to examine them.

“I’m amazed how everything fits in the space,” says Kraft. “It’s how it was meant to be. Things were pulled out that members and board members haven’t seen in 30 years.” 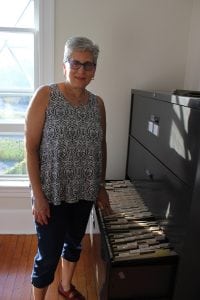 Diane Lapis stands with a file cabinet filled with records of Beacon residents who fought in the Civil War. (Photo by A. Rooney)

Lapis adds, “This move has done so much for us in doing our job, which is to promote and preserve the history of Beacon.”

One thought on “History on the Move”