“You can’t just detoxify the body; the soul needs healing time, too,” says David Gerber, director of counseling and shelter services at St. Christopher’s Inn in Garrison. “Then there’s the reconnection to skill-building, friends and family, and a life that feels useful.”

That sums up the mission of the Inn, run by the Franciscan Friars of the Atonement. The waiting list is long for its 183 beds. Once admitted, patients can stay for several months, not just the four weeks of the typical recovery center. 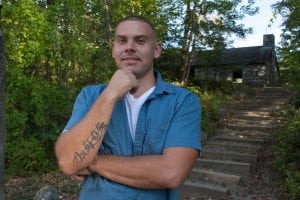 Brian Tobias (Photo by A. Peltonen)

Tobias became hooked at age 16 on the opioid painkillers he was given after appendectomy surgery at Putnam Hospital Center. When his prescription ran out, he bought pills from classmates at Carmel High School or in his neighborhood. When the pills became too expensive, he began shooting heroin.

In 2014 Tobias was arrested for breaking into a neighbor’s house to look for drugs or the money to buy them. He was busted in a Wendy’s parking lot 12 hours later, on a tip from his parents, but says he had no memory of what he had done. He fought the charges for months, ending up in Putnam County Drug Treatment Court. He received treatment at Seafield in Westhampton and Arms Acres in Carmel, and, finally — after several relapses — at St. Christopher’s.

When he entered St. Christopher’s, the cravings for opioids were still there. “But over time they started to dissipate,” says Tobias, who received Vivitrol, an anti-addiction treatment that involves a shot every 28 days.

Tobias now lives in an apartment with his girlfriend in his parents’ Carmel home. While at St. Christopher’s, he says, “I started to think more about wanting to figure out things with my family and girlfriend more than I wanted to use drugs.”

His employer, New York City Parks and Recreation, paid for his treatment at Seafield, and he still has his job. In April he was promoted. He used to cut grass; now he fixes and maintains park structures and equipment.

St. Christopher’s was started in 1909 to help men who were doing the crippling work of building the Croton Aqueduct. It evolved into a homeless shelter with an outpatient addiction treatment center.

Set amid evergreens on a steep slope, the Inn looks more like a postwar hotel than a detox center. 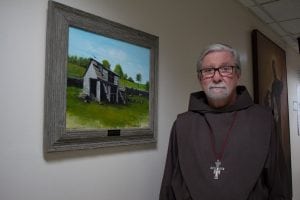 Father Bill Drobach, president and CEO of St. Christopher’s Inn. The painting shows the center’s humble beginnings in 1909. (Photo by A. Peltonen)

There is no religious test for admission. The facility is, however, run by believers and offers an optional daily Catholic Mass in addition to prayer sessions.

Tobias says “religion wasn’t really a factor [for him during treatment]. But you still had to go to meditation daily, a part of the day where you had to sit by yourself and think. That kind of opened me up to new possibilities.”

St. Christopher’s staff includes two doctors, four nurses and a number of laypeople, friars and a nun who provide counseling.

The Inn may offer both the gentlest and strictest treatment center an addict will ever experience. Cell phones are banned to reduce the temptation to arrange a drug drop. Disrespect or failure to work cooperatively will be given extra community service such as working in the kitchen. But the men’s days are full of activity. Each is assigned an “activity,” or chore.

And, “they eat a lot,” says Father Bill Drobach, the president and CEO of the facility. “So many have been on the street.”

A current resident of St. Christopher’s, Scott (the facility asks that the last names of patients not be revealed), said he believes psychological abuse by his parents, and the psychotropic attention-deficit drugs they gave him, set the stage for his addiction.

“I knew by age 4 that they couldn’t accept me for who I was,” he says. “They started me on Dexedrine when I was 4, Ritalin at 5.” The pills kept coming through his young adult years, until he turned to heroin.

“The fact that I was medicated all my life played into my low self-esteem,” Scott says. “The thought that my parents can’t even tolerate me while I’m normal, how was anyone else going to like me?” 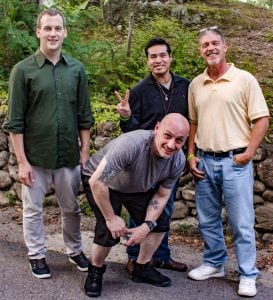 Charged with two felonies, including driving while impaired by heroin, he has twice been sent to St. Christopher’s. He says he is no longer on any medication, legal or illegal, despite being diagnosed with anxiety, depression and other ailments.

“I’ve never been a fan of organized religion,” says Scott, who was raised by Methodists. “But they talk about spirituality here as being more connectedness to people, nature, not that old man in sky with a beard.”

Drobach says the center once dealt mostly with alcoholics, but most of its patients now are struggling with opioids. In 2009, 18 percent of patients admitted were addicted primarily to heroin; in 2016, the number was 46 percent.

Of many factors the staff cite for the rise of opiate abuse, Gerber points to a time when “pharmaceutical companies went around saying we are undermedicating pain. So came the era of dentists with patients having dental surgery and getting 120 Percocets.”

And while New York state in 2013 began closely monitoring opioid prescriptions, that sent the cost of pills on the street sky high, he says. “Meanwhile, we have Afghanistan, Mexico providing cheap heroin.”

Another St. Christopher’s patient, Frank, 52, has been battling alcoholism most of his life. One day he snorted heroin, he recalls, and the next day was shooting up. He eventually lost his flooring business.

Frank says he realizes he can never return to his hometown of Ellenville because he knows people will start calling him, pushing drugs.

At the Inn, he became an acolyte and a member of the choir. He attended every Alcoholics Anonymous and Narcotics Anonymous meeting offered. 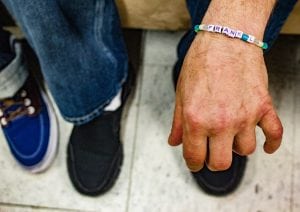 “I’ve been in four other rehabs,” says Frank, a patient at St. Christopher’s. (Photo by A. Peltonen)

“I love this place,” says Frank, who arrived in March. “I’ve been in four other rehabs. This is the only one where I feel I am getting real treatment. Security guys, the nurses — I love everyone.” He even quips about becoming a friar.

“One of my first duties or jobs here was to clean the mirrors and the sinks every day,” he recalls. “I got to look in the mirror every day, and it helped me to see myself, literally.”

After patients leave St. Christopher’s, they typically relocate to halfway houses in New York or Florida. “Any man who is about to separate from us, we give him a suit — he looks like a Wall Street lawyer when he goes out the door,” says Drobach.

Drobach notes with pride that St. Christopher’s holds an annual picnic for alumni, and this past August more than 500 showed up. “We have a dunk tank so that they can get even with us” for bossing them around, he says.

“They might act arrogant, but addicts usually have low self-esteem,” says Gerber. “The lifestyle of the addict becomes an ever-shrinking world. As addiction increases, the sense of connection to healthy people and places diminishes.”

“The men are amazed that we remember their names,” he says. “We’ve been called to heal wounds, unite what has fallen apart, and bring home what has gone away.”

Still, says Dr. Steven Shapiro, the lead physician at the clinic, “there are no miracles here. I am a strong believer in medication-assisted recovery. The men must still take counseling and AA or NA or other modalities to treat the thinking brain. The combination works very well.”

2 thoughts on “Fighting Back: Body and Soul”