On an unseasonably warm night last week, nearly 70 members of the Beacon business community filled the workspace collective Beahive for a Main Street Summit designed for merchants, nonprofit leaders and city officials to talk and network.

The summit, held Sept. 26 and organized by Beahive and A Little Beacon Blog, drew a capacity crowd. The Current was its media sponsor.

Scott Tillitt, the founder of Beahive and Re>Think Local, set the agenda. 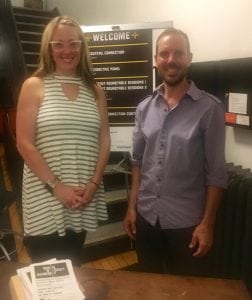 “Tonight we’re here to explore issues Beacon is facing around development, around gentrification, around infrastructure issues,” he said. “We’ll do that with the panel and then we’ll get into the roll-up-your-sleeves issues like operations and staffing and money matters.”

The three members of the panel, which was moderated by Tillitt, were Pat Moore, owner of the insurance agency Antalek & Moore; City Councilman George Mansfield, who owns Dogwood; and Kelly Ellenwood, president of BeaconArts. Their discussion focused on how a small, business-driven economy can remain viable for merchants and residents.

Beacon’s thriving downtown has come about because of “a shift in consumer attitudes and behavior” about where they shop, said Moore.

At the same time, like many Hudson River towns, Beacon’s economic vitality is closely linked to tourism. That can alienate residents and make the success of a business vulnerable to seasonal fluctuations, the weather and the fickle nature of what charms and holds the interest of visitors.

Ellenwood noted that “the only way to be a successful Main Street business is to also offer something to the local population.” She said events like Locals Nights at restaurants and galleries can encourage residents to shop and eat in town. 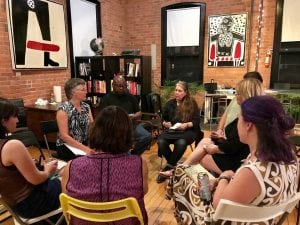 A breakout session at the Main Street Summit (Photo by C. Simek)

Erin Murphy, owner of the Reservoir boutique, suggested from the audience that reliability — specifically the need for brick-and-mortar stores to maintain consistent hours of operation — is vital to gaining consumer confidence. Shoppers need to know that they can count on stores being open when they need something and, in turn, business owners need to take note of the market and adjust.

Other argued that Beacon residents, as their part of the bargain, need to make a conscious decision to participate in its economy, walk Main Street and investigate its stores, instead of assuming specific products can only be found elsewhere or online.

Emily Burke, the owner of Utensil, voiced a common concern that development will push up rents and drive locally owned shops away. Panel members responded by raising the issues of rent stabilization, zoning changes and the role of state and local government in attracting businesses to the city.

During the breakout sessions, Katie Hellmuth Martin, the owner of A Little Beacon Blog and the design firm Tin Shingle, said she was glad to see business owners filling groups whose topics might be intimidating, such as staffing and expansion, finances and projecting revenue, and marketing.

“Business owners are often self-taught,” she said. “They got in the trenches to figure it out.”

One thought on “How to Thrive on Main”