Twice a week, the preschool room at the Philipstown Recreation Center in Garrison hosts students who are a mite older for a 75-minute painting class led by Tania Dirks of Nelsonville.

The sessions, now in their third year, are free to Philipstown seniors and so popular that a second day had to be added. They attract both beginners whose last experience was finger painting and artists who have painted on and off for decades. The classes are a mix of quiet concentration and laughter with a dash of gossip. 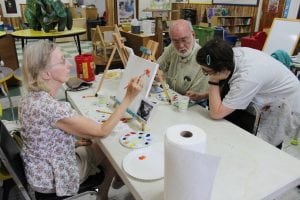 Each session has a theme, such as lighthouses, barns and rainy days. At a recent Tuesday session, the eight seniors were working on chickens and roosters. Here are some snippets of conversation:

Dirks: “You have a square canvas layout, so think about composition and remember that the tail feathers can sometimes be higher than the head.”

Marie: “How do I shorten the beak?”

Shirley: “My daughter is a professional artist. I could have been one, too. When I was younger, I didn’t have to figure out anything [while painting], I just did it.”

Dirks: “You’ve captured the plumpness of the wings. If you get the shadow of the chicken under its belly, that’ll help create the dimension.”

Susy: “I always wanted to take art, but there was a set curriculum. I became an English major, then went to grad school.  I moved here four years ago, and was excited to find this class. This year Tania added a drawing class. I did one based on a photo of my brother and his grandson fishing. It made me so happy that I gave it to him for his birthday — he loves it.” 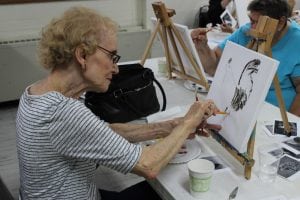 Angie DeSocio sketching in pencil (Photo by A. Rooney)

Dirks: “The proportions are exactly right. Now make her your chicken.”

Eileen: “I also do quilting. This is just an extension of creativity, and Tania is so encouraging.”

Dirks: “Eileen, you should be painting chickens 24 hours a day. I love this bird. He has that ‘This is my barn, lady’ look.”

Shirley: “I was housesitting and this bantam rooster jumped up at me with his claws.  The rest of the time I had to walk around with an opened umbrella for protection!”

Dirks: “That rooster needed therapy.” [To Susy]: “I don’t have burnt sienna, but I can mix up phthalo green.”

Dirks: “But it’s one of the world’s sexiest greens!” 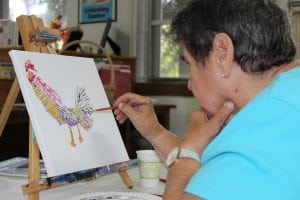 Marilynn Schlosser details her work. (Photo by A. Rooney)

Dirks, a graduate of the Rhode Island School of Design who owns six of her own chickens, brings photos to each session for students to use as inspiration. During the class, she slowly walks the room.

“The main thing I try to infuse into our painting time together is a positive, creative space,” she says. “I have delicate and specific artists, expressive and primitive and abstract artists. I have one lady, Lucille, who never paints the theme — she starts off trying and then it always morphs into something else, which always brings me personal delight!”

Photos by A. Rooney and Tania Dirks

One thought on “Seniors Painting Chickens and Roosters”