With the onslaught of hurricanes, flooding and fires affecting great swaths of the U.S., many of which required rapid evacuation, a state Citizen Preparedness Corps presentation at Desmond-Fish Library in Garrison on Sept. 21 could not have been more topical.

Created in 2014, the program is designed to educate residents about how to prepare for emergencies and disasters. It included, for the first time, a new segment: how to respond to an active shooter, such as would occur in Las Vegas nine days after the class.

The two-hour prep course has been presented to more than 100,000 people, state officials say. At Desmond-Fish, it was led by two members of the New York State National Guard, Sgt. Daniel Messina and Capt. Brett White, who travel through seven counties to reach community groups, Scouts and seniors, among others.

Messina, who was a first responder for Hurricanes Irene and Sandy, said he knew the importance of the course from personal experience. He noted that there had been 12 “disasters” declared in New York state since 2010. Besides extreme weather, they included pandemics, drought, cyberattacks, terrorist acts and “space weather,” or unusual solar activity.

In risk assessments by the U.S. Department of Homeland Security, Messina said, New York metropolitan area ranks “well up the charts” because of its population density, seaport, long coastline and position as a global financial capital.

Messina ran down steps to take to prepare. The most critical element, he said, is to develop a family emergency plan.

“Discuss types of disasters,” he said. “Pick two places to meet, one outside your home and the other outside your neighborhood. Discuss what to do if the authorities ask you to evacuate. Be familiar with escape routes and have a plan for pets. 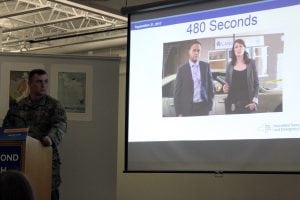 Sgt. Daniel Messina shares a video, 480 Seconds, that discusses strategies to survive an active shooter attack. (Photo by A. Rooney)

“Make sure that you have the right tools to quickly turn off all your utilities. Designate an out-of-town relative or friend to be a point of contact.” If your family includes children or older adults, find out what plans their schools and care facilities have in place.

The state offers a free Emergency Alert System (register at alert.ny.gov). You also can buy a specialty radio to receive weather reports from the National Oceanic and Atmospheric Administration for your area. See weather.gov/forecastsmaps. Check your cellphone for Wireless Emergency Alerts, which are delivered to WEA-capable phones.

The course shifted to gunfire. The three-word edict on how to deal with an active shooter is “run, hide, fight.”

To demonstrate, Messina showed a short film produced by the state Department of Homeland Security & Emergency Services, 480 Seconds, or eight minutes, which was said to be the average length of time of an attack. (A study of 160 active shooters by the FBI in 2014 found that 70 percent of incidents where the duration was known lasted less than five minutes. The gunman in Vegas fired for about 10 minutes.)

The 13-minute video, which is available on YouTube (and below), explains the best course of action for several scenarios, such as creating distance between yourself and the shooter if you have a safe path of escape, silencing cellphones, locking and blocking doors, turning off lights, leaving items behind and putting yourself out of risk first before helping others.

If you can’t run or hide, try to immobilize the shooter using improvised weapons. When law enforcement arrives, remember that they’re there to neutralize the threat; you are responsible for your first aid. 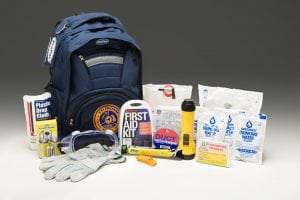 Each participant in a Citizen Preparedness Corps course is given an emergency “go” kit. (NYS photo)

White outlined what to keep on hand for an emergency. Besides a stock of seven to 10 days’ worth of supplies, prepare two “go kits,” typically in duffle bags or backpacks, the smaller of the two designed for a rapid evacuation. They should always include a first aid kit, and make sure you know how to use everything, particularly tourniquets, which can cause much damage if applied incorrectly.

Factor in one gallon of water per person per day, i.e., at least 10 gallons. Bottled water has an expiration date, because the container degrades. Replenish and restock at least once a year.