When 10 pounds of potatoes and a couple dozen ears of corn show up unannounced, welcome them home to the chowder pot.

After transforming our backyard into a lobster fest for 65 or so guests in September (three years running for this festive event), a few items found themselves left behind by those who pitched in to make the meal happen. The lobster pit not only provided heat for Maine’s finest crustaceans but for the accompaniments of potatoes, corn, mussels, eggs and sausage. We shared nearly everything but overestimated on the corn — fresh from Hudson Valley growers — and the spuds. Something had to be done with the surprise bounty. 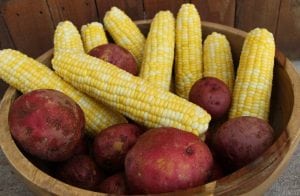 When the time came to put the surplus supplies to use, I followed the wise counsel of the renowned food writer M.F.K. Fisher. In How to Cook a Wolf, her classic book first published in 1942 and centered on preparing food during the tough times of rations (but largely about any time), Fisher calls chowder a “light and hearty soup” that would “please any hungry family.” Her basic recipe calls for potatoes and corn, but she gives readers license to go “country-simple” or “town-elegant” based on their tastes and budgets.

More candidly, when debating the controversy of whether a chowder should be tomato- or cream-based, Fisher concludes, “Who cares?” and suggests readers simply cook what pleases them. Cooking the wolf can satisfy even the loudest grumps and gripers. Invite friends and family to the stovetop. Cook something.

How to Cook a Wolf was required reading in a food-writing course I took with cookbook author Monica Bhide about 10 years ago. What I found in that lesson illustrated Fisher’s candor and dry humor when talking about sustenance for the stomach and the soul, along with her ability to write well with wit and without repetition. 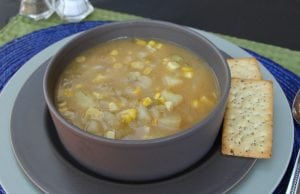 Fisher called things as she saw them and so much of what she saw leading up to and during the World War II era seems to be present in these times. Chapter titles such as “How to Keep Alive,” “How to Pray for Peace,” “How to Comfort Sorrow” and “How to Lure the Wolf” provide a framework to discuss nourishment for humanity with universal neutrality.

As for my latest pot of chowder, it filled a hungry family and disappeared completely the following day. The variation described here can be easily adapted for a vegan or vegetarian diet or enhanced with clams or ham for the meat eater. To those home cooks who render the lard after frying up a pan of bacon, that mug of bacon grease stashed in the back corner of the refrigerator can add the right measure of fat to the base of your chowder. For big bacon lovers, crumble fried bacon on top of the chowder just before serving. That results in truly rich chowder.

With respect and appreciation for elaborate as well as basic meals like chowder, I am signing off from my regular column at The Current. In addition to writing this column, I’ve enjoyed working in multiple capacities with the organization since its early, digital-only days.

I’ll still be writing and cooking, of course, and next up is the semi-annual Middle Eastern tasting that my husband and I prepare for about 30 people. The table entices with spicy meats, salads, stewed vegetables and freshly baked bread. Made with everyday ingredients, the mosaic of recipes from the Middle Eastern region turns out an embracing aroma that helps one disregard the wolf for a while.

Cook onion, celery and green pepper in bacon grease until browned. Stir in paprika. Add water, potatoes and salt and bring to a low boil. Simmer until tender.