Organizers of the Congress, which was sponsored by the nonpartisan Ecological Citizen’s Project, are asking residents to vote for their three favorites of the 40 ideas generated. Each household in ZIP codes 10524 and 10516 will receive a ballot that can be mailed back or dropped at the Desmond-Fish Library in Garrison or the Butterfield Library in Cold Spring. Alternatively, anyone age 13 and older can vote at ecologicalcitizens.org/pcc2017ballot. The deadline for both paper and online ballots is Oct. 31. 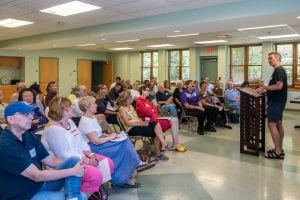 At the Sept. 24 forum at the North Highlands Fire Department, James Geppner proposes that households be automatically enrolled to use wind and solar energy. (Photo by Jane Marcy)

An abbreviated sample of the proposals is below. To review all 40 in detail, visit ecologicalcitizens.org/pccproposals. After the vote is tallied, organizers will share the results with elected officials and other community leaders.

The cans at Little Stony Point are not strong enough. (Kathleen McLane)

Located on Main Street in Cold Spring, the center would be student-driven, but organized and run with adult supervision and an adult advisory group to help with planning and logistics. (Joe Plummer/Sandy McKelvey)

When a person opens a new account with Central Hudson, the household would be automatically enrolled in a plan that uses locally sourced wind and solar energy. (James Geppner) 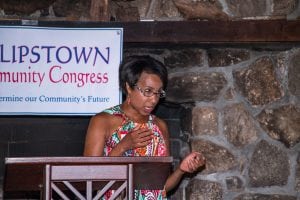 At the second of three forums, held at the Garrison Fish and Game Club on Aug. 20, Janice Hogan suggested a petition to demand the county share sales-tax revenue with Philipstown. (Photo by Jane Marcy)

We need to find a way to shrink our landfills and re-kindle a deeper connection to our farms. (Erik Brown)

I’d like to propose offering neighbors between the Garrison School and the Desmond-Fish an easement to create a path between the school and library. (Jen McCreery)

There is bus service on the east side of the county — why don’t we have it on the west side? (Joyce Blum)

To address the fact that Continental Village residents pay higher property tax than elsewhere in Philipstown, why don’t we build another school? (Nancy Lauterbach)

The notion that rape does not exist in our community is naïve and dangerous. (Lynda Ann Ewen)

We should look at ways to provide for both motor vehicles and bicyclists to safely share the roadway such as warning signs, revisiting speed limits and design improvements to Route 9D. (Tom Hayden) 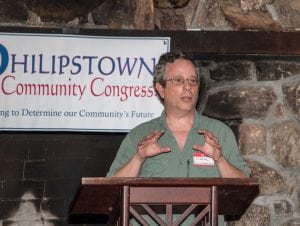 At the forum on Aug. 20, Mark Bass proposed a “picking it up” campaign to clear trash. (Photo by Jane Marcy)

I would like to see residents grow gardens for the food pantry or share a portion of an established garden bounty. (Tim Greco)

We need to ban plastic bags from all stores. (Lauren Carrigan)

Rec Center improvements
I propose improvements to the Philipstown Recreation Center such as tennis courts and a pool. (Marianne Sullivan)

Cold Spring Boatyard
Built on the north end of Cold Spring, it could be a major tourist attraction, a hotbed of skills for young and old and a perfect Southern terminus for the Fjord Trail. (Sandy Saunders)

Participatory budgeting
Community members would decide how to spend part of a public budget. (Jocelyn Apicello)

Sister City
For a small annual fee, Sister City International will advise on all aspects of becoming one. The world is open to us. (Gretchen Dykstra) 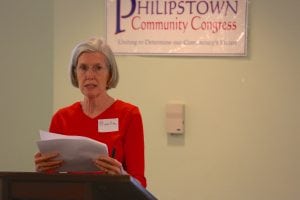 Priscilla Goldfarb, one of the organizers of the Congress, speaks on Sept. 24 at the third forum, held at the North Highlands Fire Department. (Photo by Ross Corsair)

Community garden
It would include a composting center, indoor classroom, workshop and greenhouse. (Rodney Dow)

Comprehensive Plan
A group of volunteers created a Comprehensive Plan that was adopted in 2006. As a member of that group, I’d like to see the Town Board appoint a new committee to continue the effort. (Nat Prentice)