Cader, a senior and co-captain on the girls’ varsity soccer team, scored three goals, including two in the first six minutes of the second half, in a 4-0 victory over Peekskill on Oct. 10. She has been a big part of the Bulldogs’ 10-game streak without a loss after starting the season 0-4, including a 3-0 victory over Lourdes on Oct. 12 that gave Beacon the league title. 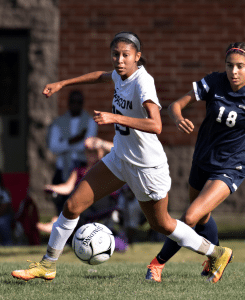