District says installer had been unresponsive

A large array of solar panels installed on the roof of Haldane Elementary School has not generated electricity for the district for nearly a year due to maintenance issues.

After a fire on the roof in December, Haldane staff quickly identified the source as one of 16 switches encased in boxes that are supposed to be waterproof.

The elementary school panels are the largest of three arrays installed on the roofs of district buildings in 2015 as part of an agreement with Monolith Solar. A total of 958 panels were installed at no cost to Haldane with a 20-year lease and were expected to save the district about $21,000 annually in energy costs.

Soon after the fire, Mark Fobare, the founder and CEO of Monolith, told the board that it had been a “one-in-a-million situation,” comparable to a tire blowing out on a car. “Your car manufacturer didn’t really have any direct participation,” he said, “but I’m standing here and taking responsibility to make sure the system is safe.” 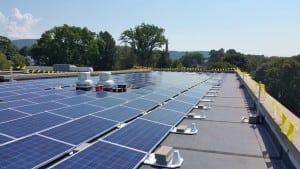 By that time, water had seeped into another of the switch boxes. Superintendent Diana Bowers told Fobare that the district wanted a third-party inspector. The elementary school roof is the only one that uses that type of switch, he said, and it was the first time his company had used “this particular configuration.” He said the boxes would be replaced.

The issue did not come up again until the board’s Oct. 3 meeting, when Bowers provided an update. She said water had eventually seeped into all 16 switches on the elementary school roof. The elementary school panels are not generating power, although smaller arrays on the high school and bus garage are functioning.

“Our attorneys have been back and forth,” with Monolith, she said. “I’m sorry to say that that they have been almost unresponsive. A couple of weeks ago — when we gave them a deadline — there was a response.”

Bowers also noted she had told Monolith’s attorney that it might be time for the district to contact the New York State Energy Research & Development Authority (NYSERDA), which provided funding for the installation. Although the state Department of Education has told Monolith to replace the faulty switches with ones from a different vendor, Bowers said “we are waiting for an agreement about annual inspections before we allow them to make changes and put the panels back into service.”

When reached by phone, Fobare would say only that the company was in contact with the district. “If the superintendent is going to follow the contractual agreements, I think we’re all set,” he said.