Directors create a neighborhood theater — behind their house

But what the city has been lacking, at least according to Jason Craig and Jessica Jelliffe, is a flexible, chicken-infested theater space for people who prefer their musicals to be as “stabby” as they are catchy.

Craig and Jelliffe, co-artistic directors of the experimental theater company Banana Bag & Bodice, have turned their backyard at 194 Fishkill Ave. into a theater, which opened this month with Thursday and Friday night performances of their musical Sandwich. Admission is free but since the backyard isn’t that big (and the chickens need space), reservations are available at brownpapertickets.com. 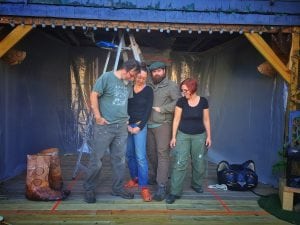 “Years ago this show was our introduction to the New York City community, so it’s the perfect show to use as our introduction to the Beacon community,” Craig said a few days before opening night on Oct. 5. “There’s something approachable about this show. It’s got a weird sense of humor but it’s not very long, the songs are fun and catchy, it’s very bright and kid-like.”

Jelliffe interjected: “It’s not necessarily for kids, though.”

When Sandwich had its debut in New York City in 2005, Time Out New York advised: “Stab whom you have to for a ticket!” That gives you an idea of the quality of the show and its dark humor.

Craig and Jelliffe founded Banana Bag & Bodice in 1999 in San Francisco and have created a dozen original touring shows. Their best-known production is an adaptation called Beowulf: A Thousand Years of Baggage, will be restaged in 2018 at the Signature Theatre on 42nd Street. Like Sandwich, Beowulf is a collaboration with composer David Malloy, known for his Broadway hit Natasha, Pierre & The Great Comet of 1812.

Craig and Jelliffe moved to Beacon from New York City three years ago. “It had all of the things we were looking for,” said Craig. “An artists’ community, closeness to the city, mountains and the river. But we had no idea that so many people from the city had been moving up here.”

While Beacon has its share of theater artists, the vast majority still perform in New York City. But performance space is expensive there. So last winter, they took one of their shows — an off-beat telling of the Nativity story created as a collaboration with Manhattan’s Trinity Church — and performed it in their Beacon backyard. 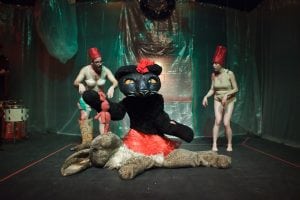 “We figured, why not just perform it up here with anyone in town who wants to sing and dance?” said Craig. “It was a lot of fun.”

Inspired, the couple built risers, extended the floor of their garage, convinced their lighting designer Miranda Hardy to visit from Portland, Oregon, to rig up a system and — most important — secured the blessings of neighbors. Sandwich is the first show in their newly converted space.

Alex Harvey, who performs in Sandwich some nights and offers a directorial eye, thinks the space could ease tensions between Old Beacon and New Beacon. The backyard show “has the potential to create co-ownership over things” and “maybe even break down a barrier or three,” he says.

Once Sandwich concludes in the space, the second show will not be Beowulf, which requires 12 performers and a large band.

“Yeah, I don’t know about that one,” said Craig, while scanning his neighbors’ homes. “It’s pretty loud.”

One thought on “Backyard Stage”