There has been a soccer renaissance at Beacon High School, with both the boys’ and girls’ programs playing at high levels headed into the Section 1 playoffs.  The Haldane programs, meanwhile, have had disappointing seasons compared to years past but are looking to peak at the right time.

Coach Craig Seaman came into the season looking to surpass the Bulldogs’ 12-6 campaign last season, which included the league title and a tournament victory. At 14-1-1, he wasn’t disappointed. Beacon, the fourth seed in Section 1, Class A, will host No. 13 Nanuet in the first round of the tournament on Oct. 20. The other top seeds are defending state champion Somers, Tappan Zee and Byram Hills. 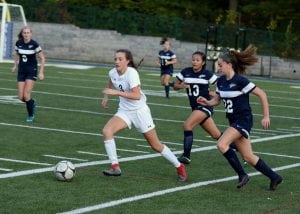 Bela Monteleone (3) advances the ball at home against Putnam Valley on Oct. 17. The Blue Devils, who lost, 2-1, on a late goal, host Hamilton on Oct. 26 in their first game of the state tournament. (Photo by Scott Warren)

In 2016 the girls’ varsity program broke through, winning the league title for the first time in 20 years. This year they began the season with four straight losses but turned it around under Coach Hugo Alzate to repeat as league champs with a 7-0-1 record, 9-5-2 overall.

Beacon is the No. 12 seed for the Section 1, Class A playoffs as it attempts to become the first girls’ soccer squad at the school in 29 years to win a sectional tournament game. The Bulldogs host No. 21 Sleepy Hollow on Oct. 20; the winner will travel to play No. 5 Tappan Zee the next day.

Reanna Cader and Chloe Antalek led Beacon with 11 goals each on the season. Eliza Ericson had nine goals and six assists, Analiese Compagnone had six goals and three assists and goalie Meagan Meeuwisse made 120 saves.

The Haldane boys, who finished 4-12, drew the lowest seed in the Section 1, Class C tournament. They travel to No. 1 Solomon Schechter on Wednesday, Oct. 25, while No. 2 Tuckahoe hosts No. 3 Hamilton. If Haldane upsets Schechter, the boys will play in the sectional finals on Oct. 28 at Lakeland High School.

First-year coach Ed Crowe will lead the girls’ varsity (4-10-2) into the Section 1, Class C tournament on Thursday, Oct. 26, when the No. 2 Blue Devils host No. 3 Hamilton. Solomon Schechter, the top seed, will play Pawling. The winners will meet on Oct. 29 at Arlington High School for the sectional championship.

The Journal News pegs Haldane to repeat as the Section 1, Class C champions, noting the team “pretty much played a Class B schedule this season.”