Prior to 2016, fire protection in Garrison was provided by the Garrison Volunteer Fire Company with oversight from the Philipstown Town Board. At the end of 2015, the board established a fire district. It appointed five commissioners, four of whom were fire company members.

Because 2017 was the first year for the new commissioners to set a budget, state law allowed them to ignore a state-mandated 2 percent tax cap and approve a 27 percent budget increase. At the December 2016 election, three of the five fire-company members who ran were defeated. I was one of the new commissioners elected. I am not a member of the fire company.

I voted no on the proposed 2018 budget and wanted to explain why. (The commissioners approve the budget each year; it is not put to a public vote.)

The 2017 budget, totaling nearly $800,000, will include a surplus of at least 10 percent due to overstatements in pension, workers’ compensation, insurance and legal costs, even if all of the firematic, Station 1 and Station 2 budget lines are spent. This reduction will continue in 2018 and into the foreseeable future.

In addition, the last installment of the second mortgage on the Route 9 firehouse was paid off this year, providing a savings of about $22,000 annually into the future.

That 10 percent surplus comes even after the commission set aside $40,000 for reserves and paid $25,000 in annual rent to the fire company as part of a five-year lease agreement for an office in the firehouse, although the Fire District (i.e., the taxpayers) pay the mortgage, insurance, repairs, maintenance and all other expenses for the facility. 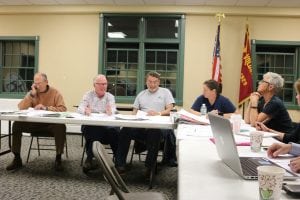 The Fire Company, a nonprofit organization which is bound to spend its income for the good of the community, has stated that it will not spend any of the $50,000 rent it has received for 2016 and 2017 until the “public evidences trust in the company,” according to company President Steve Rosario. I am not sure what that means, but it goes to the heart of the matter. The public’s trust in its Fire Company and vice versa is jeopardized by lack of transparency, particularly with respect to its finances and membership.

There are two hopeful signs. First, the commission agreed to publish a statement of purposes and intended size of the reserve funds. Second, a working group will be established to work on a five-year strategic plan.

Both of these efforts should be opened to the community. Then we can begin to have an atmosphere in which our firefighters will have what they need to protect the community and taxpayers will be enthusiastic partners.

The 2018 budget has a decrease of less than 1 percent over 2017. The remainder of the 10 percent savings will be used to add to the reserves and fund budget lines for deferred maintenance and major repairs, which are basically new reserves but notably do not have to be approved by voters.