As regional symphonies across the country struggle for survival, the Greater Newburgh Symphony Orchestra plays to ever-growing audiences. Its average attendance has doubled to 700 people in the past two years, and its July 29 concert at Mount St. Mary College drew more than 1,000.

Its next performance is Saturday, Oct. 28, when it will perform works by Brahms and Dvořák in a concert at Aquinas Hall on the campus of Mount Saint Mary College in Newburgh. 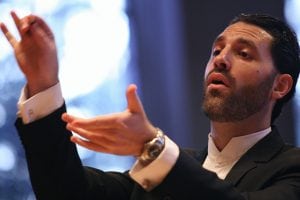 The nonprofit orchestra is constantly looking for ways of providing “great music performed by skilled musicians who are also your neighbors,” its mission since its founding in 1995, says John Bliss, president of its board.

There are some 1,800 orchestras in the U.S., but about 80 percent, like Newburgh’s, do not include professional musicians, according to the League of American Orchestras. Yet many of the 55 to 70 volunteer players in Newburgh have vast experience. (The conductor, Russell Ger, is paid.)

Tickets for concerts at Aquinas Hall at Mount Saint Mary College in Newburgh are $22 to $45 each, and season tickets are also available. Students are admitted free. See newburghsymphony.org. With the exception of Dec. 16, musicologist (and cellist) Gordon Shacklett will lead a discussion at 6:30 p.m. about the music to be performed.

“Our orchestra members range in age, ability and day jobs,” says Bliss. “They’re anywhere from their 20s to 70s. We have lots of music teachers, and a flutist who was with the West Point band for 25 years. They come from an area that extends from Dobbs Ferry to northern Dutchess County.”

The current season, which runs through June, includes five performances in Aquinas Hall at Mount Saint Mary College. The orchestra also plays with regional choirs and at the Sugar Loaf Performing Arts Center and local high schools such as Newburgh Free Academy. In addition, there is an annual concert in which its members play alongside students. 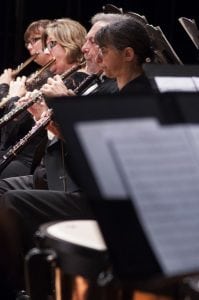 When there are major positions to fill, the orchestra holds auditions, but it also relies on a pool of around 100 musicians. The orchestra has no paid support staff, so the conductor serves as its music director and personnel manager while board members and other volunteers handle everything from publicity to contracts to ticketing and information technology.

They are motivated, in part, by “the enthusiasm felt from the people of Newburgh,” Bliss says. “You can feel that they feel the orchestra is part of the renaissance of the city and they’re very proud of it.” 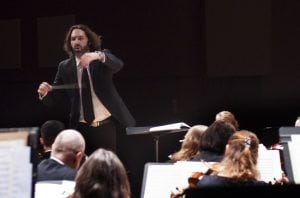 The organization’s roots, oddly enough, lie in South Korea. Its founder, Dr. Woomyung Choe, came to the U.S. to complete his medical training as an oncologist and, after also earning a bachelor’s degree in music at Skidmore College and studying at the Pierre Monteux School in Hancock, Maine, decided that Orange County needed a symphony. (He had first been exposed to Western music listening to Gregorian chants sung by priests who were part of a French Catholic delegation to Korea.) Today the orchestra survives largely through donations.

How’s Your Voice?
The Greater Newburgh Symphony Orchestra also supports a chorale with 30 to 35 members that performs twice a year. It rehearses each Tuesday at 7 p.m. at St. George’s Episcopal Church in Newburgh. An audition is not required. Contact Peter Sipple at [email protected] or 845-534-2864.

Its conductor and director, Ger, is an Australian whose repertoire spans orchestral, operatic and choral music. He was hired in 2016 after a two-year search that saw 100 candidates whittled to four finalists, each of whom led one performance during the 2015-16 season as a guest conductor.

Ger also conducts at a synagogue in Manhattan and for a youth orchestra in Connecticut and travels the world as a guest conductor and for speaking engagements.

“Most of the candidates [for conducting jobs] have this kind of resumé,” Bliss says.